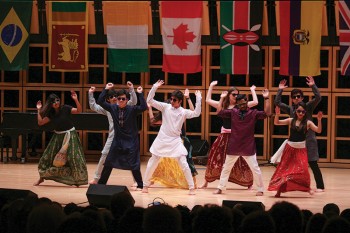 Goshen College students during a performance at the ISC Coffeehouse on Saturday.
Photo contributed by Hannah Sauder

The International Student Club put on another successful ISC Coffeehouse event this past Saturday evening, March 14. Students, family and friends alike enjoyed a meal as well as a music and dance performance at Sauder Hall following put together by the international community of Goshen College.

Festivities began at 5:00 in the College Mennonite Church Fellowship Hall where ticketholders were greeted by international students and volunteers ready to serve an array of dishes from over 30 different countries from around the world, all represented by Goshen College students. Due to a sold out event, lines were lengthy with patrons eager to try a scoop of the many delicacies offered, some of which included sweet soy sauce chicken from Korea, and a chicken coconut masala from India. Many students wore traditional clothing from their native countries, expressing their culture through food and dress.

After an offering of second helpings, attendees migrated across campus to Sauder Hall for the start of the music and dance showcase at 7:00. Some were invited to take seats in the balcony due to packed bottom floor of Sauder Hall.

Achieng Agutu, Jon Kaasa and Aritha Weerasinghe served as the performance’s MC’s, leading in comedic transitions as well as games from their respective countries that several lucky audience members were able to participate in. Coincidentally, prospective student weekend also fell on the weekend of ISC’s cultural celebration. This resulted in many prospectives being singled out to the delight of the audience to participate in a Norwegian potato carrying race.

“It was interesting to be on the other of things; organizing and doing behind the scene work, rather than being in the audience or being a performer. It takes a lot of work to execute an event of that capacity,” said Agutu in response to organizing the event.

As an ISC leader and organizer, Agutu was involved in many facets of the evening, including taking part in a powerful stomp performance alongside Alia Byrd and Etienne Davis. “All the cultures we represented with so much pride and that made me extremely happy. I don’t get to celebrate my culture and the traditions of my country every day, but when I get a chance to you know I am going to do it big,” said Agutu.

The performances consisted of a blend of dancing, singing, and presenting in different ways to properly portray their home country’s culture. Kevin Florentin, Tae Hwang, and Sara Azzuni each gave slideshow presentations on Paraguay, Korea, and Arabic countries respectively, giving in depth insight into the daily lives and traditions of their home regions. Other dancing numbers, like the Folkloric Latina number by Mimi Salvador, Majo Chavez, and Alma Rosa Carrillo showcased a unique blend of Latin American dance styles and their attire.

Chris Moon, an ISC leader, had a large hand in preparing the Sauder Hall performance.   “During auditions, we looked for performances that really reflected the culture of that specific foreign country,” he said. He also went on to say that they strived to differentiate from kick off performances, which are generally based on pure talent rather than representation. “It really cool to see my country represented [Korea], even though I wasn’t on stage. It was nice to see my culture represented along all of these other countries in a respectful environment,” he said. “I sensed the unity.”

The proceeds of the ticket sales go to international student scholarship assistance and future ISC events, as well as the charity of the clubs choice. This year, ISC chose the International Committee of the Red Cross in Syria. During the performance, ISC showed a short video depicting how the Syrian crisis has affected masses of people and their access to clean drinking water. “We chose Syria because it is one of the biggest areas of need in the past year.” said Moon. He explained that at first they were hesitant to donate a charity as large as ICRC, but their specific focus in Syria as exemplified in the video showed a commitment to people in need.