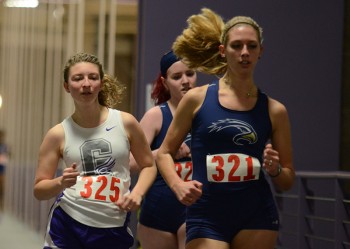 Abby Dunn, senior, was one of two Goshen College race walkers to be named an All-American last weekend.
Photo by Maria Bischoff

Every athlete dreams of being called an “All-American,” and for two Goshen College race walkers, that dream came true last Friday, March 4th, at the NAIA Indoor Track and Field National Championships in Johnson City, Tennessee.

Abby Dunn, a senior, is no stranger to earning the All-American status. Her third place finish, with a time of 15:19.75, earned Dunn her sixth All-American award. With one more top-eight finish at the NAIA Outdoor National Championships in May, Dunn will be in elite company, joining the ranks of only four other track stars in GC history to earn at least seven All-American awards.

“For me, standing on the podium and earning an All-American award is an experience that comes with many emotions,” Dunn said. “It is always an honor to stand on the podium alongside the best women in the country. This year in particular was very bittersweet because it was my final time competing at indoor nationals. Standing on the podium was when it really hit me that this was the last time I would ever stand on a podium and represent Goshen College indoor track and field.”

For Sawyer Biddle, a sophomore, his fourth-place finish with a time of 15:15.19 earned him his first All-American award. This was his first time qualifying for Nationals. Biddle made things interesting by finishing just seconds before three other walkers.

“I was thrilled to represent my school and to be a part of the legacy of successful Goshen race walkers,” said Biddle. “I would have to say the reason for my success thus far has been my coach, Doug Yoder, and my teammates, Abby Dunn and Kayla Gray. Their expertise and enthusiasm for the sport is inspiring to me, especially since this is my first season as a race walker. I’ve learned so much from them.”

Kayla Gray, a junior race walker, came up just short of All-American honors with a 10th place finish in 16:26.66. Gray completed one of her best races this season, placing five spots better than she was seeded heading into the Championships.

Doug Yoder, head race walking coach at GC, said, “The race walkers work as hard as anyone on the team.  We have developed a work-out program that strengthens the physical and mental abilities of the athletes that allowed them to get to the national meet and perform at the high level that they did. I was very proud of the race walkers for their accomplishment.  It is always a thrill to see all the hard work that an athlete puts in pay off.”

The race walkers’ quest for the NAIA National Outdoor Championships begins March 26 as they, and the rest of the Goshen College track team, head to Defiance College to participate in the Dick Small Invitational.