Should Deaf people be allowed to have children? 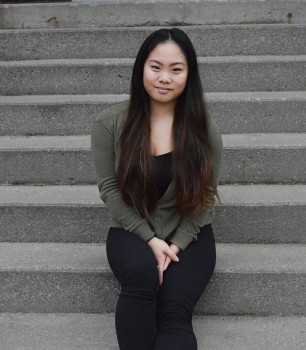 Olivia Ginn, senior, believes that Deaf parents have everything to be succesful.
Photo by Maria Bischoff

During my sophomore year at Goshen, I took Race, Class, and Ethnic Relations, a class that invites students to think about the social world we live in and its inequalities. During one of our sessions, the topic of Deaf couples having children came up and a student said, “I don’t think that Deaf people should be able to have kids because they’re imposing deafness on them.”

Before I continue, I want to differentiate the terms deaf and Deaf as they have different meanings. With a lowercase “d”, deaf means to be without hearing. With an uppercase “d”, Deaf means to be without hearing as well as being a part of the Deaf Culture. Being Deaf is something that they are rightfully proud of as they have fought oppression and they have fought for their language and culture to be recognized as a legitimate one.

After declaring ASL-Interpreting as my second major and having just completed Deaf Culture, I was shocked by this statement. I was taught that Deaf people have the same right as anyone else to have children; having hearing children is a blessing, but having Deaf children is a special blessing.

Stories about this have made the news and many people are quick to provide their two cents. Hearing people, who know nothing about Deaf Culture, say that it’s ethically wrong to choose a fate for their children and that they is only predisposing them to a long life of disability and hardships. Many believe it to be a selfish act of the Deaf parents and call it a crime, disgusting, and child cruelty.

However they have one perspective that is blind to everything that Deaf Culture is and stands for. Deaf people are fully capable of accomplishing anything and adapting to anything. For example, a Deaf man just won America’s Next Top Model and will be competing in Dancing with the Stars! Many Deaf love being Deaf and, if given the choice of being born Deaf or hearing, would choose to be Deaf. They believe that if they were hearing, they would be a different person which is not synonymous with being a better person.

They argue that life is full of challenges and that being Deaf is one that has built character. They believe that this world is meant to be inhabited by diverse people, whether by sexuality, skin color, religion, culture, or gender. Discrimination against such groups is ethically wrong, so why is audism, or discrimination against the Deaf, acceptable?

Like any other couples, they want to raise their children in the best way possible, and in their experience, the best way is a Deaf one.

The Deaf community is a minority group that is surrounded by a hearing world. For example, Deaf people cannot watch most YouTube videos because they lack captions. Historically, because they cannot hear, the government, institutions, and family and friends have been trying to integrate them into the hearing world by way of oralism which is speech therapy and lip reading. However, Deaf people don’t want it. They love their culture, community, and language and they wouldn’t have it any other way.

Deaf babies are human beings and their differences should not be considered a loss, but a gain. The Deaf see themselves a part of a strong and powerful cultural group. Their history and language is one to be proud of and they wish to pass that, and all of the previously mentioned benefits, to their children.

In closing, I offer a bit of advice on the topic. If in the future you have the chance to weigh in on this topic, remember that Deaf parents have everything they need to be successful. Naturally, not all Deaf people have an education and a mansion, but not all hearing people do either. Empower them to make their own decisions instead of imposing your hearing opinions onto them.

As Audre Lorde said, “It is not our differences that divide us. It is our inability to recognize, accept, and celebrate those differences.” Moving forward, I encourage everyone to celebrate the differences we are surrounded by.