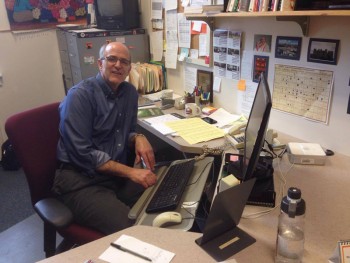 Dean Rhodes teaches Spanish classes and is leading the Spain and Morocco Trip this coming May Term. During his tenure as a student, Rhodes left after his sophomore year to serve with MCC.
Photo by Luis Perez Lerchundi

After his sophomore year at Goshen College, Dean Rhodes, associate professor of Spanish, decided to take a break and spend his next 27 months with Mennonite Central Committee in Peru.

“My parents were very worried,” he said. “They were afraid I would never go back to school.”

Rhodes eventually went back, but only after working with MCC for two and a half years to help rebuild after an earthquake. At the time, he had just spent a semester on SST in Nicaragua and still didn’t have a major as his sophomore year drew to a close. While his academic advisor was suggesting education, Rhodes wasn’t sold and decided that instead of rushing a decision, taking some time off would be a good idea. So he went to Peru.

“Taking this assignment was almost a relief,” he said. “I didn’t worry about coming back to college as much as the people around me. I knew I’d go back.”

He had found a passion for Spanish in high school, where he fell into studying the language by accident.

“In those days, I had no idea that it would be as prominent and important as it is today,” he said. “I remember the first radio station I heard in Spanish was exciting.”

When Rhodes left for Peru, his Spanish wasn’t perfect. He had a general grasp of grammar, but he wasn’t fluent. Yet, after a week in a Catholic language school, the nun closed his book and told him he knew too much and needed to get out of the book. Then she sent him out to work on the construction site.

“One of the fears I had was how could I work in construction when I didn’t know the language very well?” he said. “But you learn the language; you have to.”

His time in Peru helped shape who he is today.

“It has helped me appreciate the plight of the downtrodden, second-class citizens,” he said. “I have a heart for those that don’t have all the fair shakes in life.”

Another influential event from his time in Peru was the loss of his friend Dave Erickson, a college student who had come down to volunteer with MCC. Rhodes and Erickson were planning on traveling to Bolivia for Christmas in 1971, so they applied for visas. Rhodes’ visa came, but Erickson’s never did.

The two traveled to Cuzco and waited for a few days, hoping Erickson’s visa would come, but eventually Rhodes went on to Bolivia, and Erickson went back to Lima. On the flight from Lima to their jungle location, the jet crashed, and Erickson was killed.

“Had I not gotten a visa, I would have been on that flight,” said Rhodes. “I realized there’s something special that God wants from me or for me. It was life-changing.”

Since then, Rhodes has worked to live out his faith by being helpful and uplifting to people, especially those who are marginalized.

“I think faith prompts me to be mindful of those around me who have not been given a fair shake,” he said. “Faith without works is nothing, but so is works without faith. They go hand-in-hand.”

After coming back from Peru, Rhodes made plans to go back to college. He had wanted to return to Goshen, but he realized that all of his friends had graduated, so he finished up his degree in social studies education and Spanish at the University of Iowa.

Rhodes was teaching at Iowa Mennonite School when the position opened up at Goshen College.

“Goshen came knocking on my door,” he said. “Most of my good students from IMS went to Goshen, and they told the college about me.”

It was perfect timing because Rhodes needed a change and was growing tired of the high school scene.

“I never regretted the decision to come teach at Goshen,” he said. “May Term gave me an opportunity to lead some overseas trips. I enjoy seeing students’ eyes open to the world and their minds expand. I like to see that stretching experience when they’re in an overseas learning environment.”

One goal that Rhodes has is to make sure that he does what he can to help the people around him be successful.

“No matter what we do, everyone’s important,” he said. “Something as small as a greeting to the people mopping the floors. My goal is to be an inspiration and help people realize their God-given gifts.”