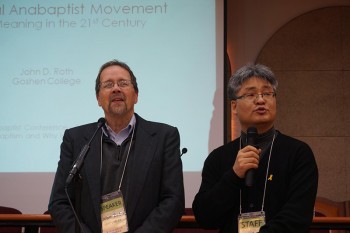 John Roth has always traveled a lot, but his new position as the Secretary of Faith and LIfe in the Mennonite World conference has increased his travel
Photo by John Roth

John Roth, Goshen College professor of history, has had many other jobs that include writer, editor and speaker. Roth has been working at Goshen College for thirty years, starting in 1985. For the past twenty years he has been traveling two weekends a month speaking at churches, conferences, conventions and other events.

“My traveling has been a long-standing part of my job as a preacher and teacher,” he said.

In the last year, Roth has taken on additional assignments that have him traveling even more often. In September he was in Germany, and then by October he found himself in Namibia. He has also travelled to western Canada, Spain, Pennsylvania, Illinois, Virginia and Ohio. Roth also added South Korea and Indonesia to the list in February.

MWC has four commissions: deacons, faith and life, mission and peace. Roth is the secretary of the faith and life commission. Roth also started the Institute for the Study of Global Anabaptism, or ISGA, at Goshen College five years ago.

“It’s that assignment [Secretary of Faith and Life Commission] that has led to much of my international travel,” Roth explains. “My goal with the ISGA has been to shift the focus of research that has long been part of my work at GC to focus on the global church. So some of my travel is also related to projects that have come out of the ISGA. It’s the coming together of ISGA projects and MWC projects that have led to this travel.”

Roth’s trip to Namibia was an invitation from the Lutheran World Federation.

Roth went to South Korea at the invitation of an indigenous Anabaptist movement. They held a conference on the theme “Anabaptism today,” and invited Roth to speak on the topic of being an Anabaptist in the 21st century.

“I have been invited to give leadership to a 10-year project that focuses on the commemoration of Anabaptist beginnings,” said Roth, referring to this next year as it will mark 500 years since the beginning of the reformation. “Every year I will be working with other people to plan an event in some part of the world that will look back at the Anabaptist beginnings and ask, ‘what is the relevance of this for today and in this particular context?’”

In 2017, the commemoration, called Renewal 2027, will start in Germany, and will move to Kenya, Central America, western Canada and Indonesia each year after. The location for the final five years have yet to be planned.

“I was there to help reflect on what Renewal 2027 would look like and to give some structure to the upcoming events. We see it as an opportunity to look back in the past but mostly to look forward with the awareness that the majority of the Anabaptist movement today is outside of Europe and North America.”

Roth says what is behind Renewal 2027 is the growth of the Anabaptist movement from 600,000 people 30 years ago, mostly in Europe and North America to 2.1 million people today, with the large majority being in Africa, Asia and Latin America.

“I’ve been a student of Anabaptist history all my life, and what’s interesting to me is the fact that this movement that started 500 years ago is now growing exponentially, and that growth is happening in places that aren’t Europe and aren’t North America,” Roth said. “And I find that thrilling, exciting, fascinating.”

Outside of traveling for the ISGA and MWC, Roth has authored eight books.

“I’ve tried in much of my writing to draw on my work as a scholar but to write for a general audience,” said Roth. One such book, “Choosing Against War: A Christian View,” worked to make a basic case for Christian pacifism.

In addition to writing, Roth also edits the journal the “Mennonite Quarterly Review,” a more scholarly journal. He has been writing two monthly columns—one for “The Mennonite,” a church paper, and until very recently he had been writing a column for the “Mennonite World Review.”

“I found a calling to write in a language that communicates with ordinary people,” said Roth.

Because of the writing that Roth has done, people have contacted him asking to speak on what he wrote, another factor that contributes to his travel. “People see something that they find interesting and say, ‘would you come and speak on this?’”

Lucky for us, Roth teaches right here in Goshen, despite his extensive traveling. As Roth travels, learns and writes more, that breadth and depth of knowledge is devoted to the classroom, giving history a very real connection.