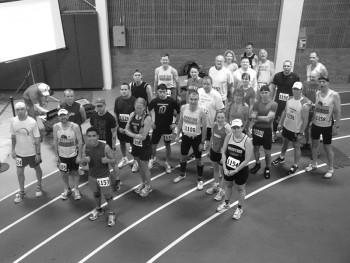 Some of the participants from the Maple Leaf
Marathon in 2013.
Photo from Record Archives

On February 20th and 21st, runners competed in the eighth annual Maple Leaf Marathon at the Roman Gingerich Recreation and Fitness Center. Each of the three marathons hosted over the course of the weekend totaled 204 laps on the running track, for a total of over 78 miles in 24 hours.

The first marathon started at 8:30 a.m. Saturday and the second marathon began that evening at 5:30 p.m., followed by the third marathon at 2:30 a.m.

The Maple Leaf Marathon is also USA Track and Field certified. The USATF certification program is structured to produce accurately measured distances. Courses must be certified for any running performance in order to be accepted as a record or to be nationally ranked. If you do the math, this requires runners to complete 204 laps, the equivalent of over 26 miles of endurance and speed.

Over 70 marathon runners participated in the full marathon this year. Only 10 of those participants were from the Goshen area. Other participants came from Wisconsin, Texas, Georgia, Arizona, Quebec and a number of other states nationwide.

Each marathon was limited to thirty-five total participants and only a few additional exceptions depending on individual circumstances. Of those participants, some even ran in back-to-back marathons on Saturday.

Participants kept track of each lap they completed by using chip timing, a system that requires the runners to wear a small lightweight chip that identifies when they cross a lap marker. Chip timing electronically processes the results at the conclusion of the marathon and instantaneously marks the laps they have completed. Similar to the USATF certification program, chip timing is a system that aims at accuracy.

In addition to chip timing, digital clocks were displayed at the start and finish line for runners to track the running time of the marathon.

Spectators were welcomed to cheer on the competitors and music was played to spark the competition. This year, each marathon had different selections of music. For the first marathon, Doug Yoder, Goshen College’s race walking coach and Maple Leaf Marathon director chose selections of current rock and pop music to heighten the competitive atmosphere. The second and third marathons played a variety of 60s, 70s, and 80s rock.

Hosting three marathons in 24 hours is something Yoder says no other marathons are doing. However, the Maple Leaf Marathon has also built a foundation on tradition. Other than nation-wide participants and consistently intense competition, Yoder said that it is tradition to play fifteen minutes of polka at the four-hour mark.

Besides the great competition and opportunity to run a marathon in February, the annual marathon is focused on giving back. All proceeds of the event are contributions to local and regional charities.

According to Yoder, “The proceeds from the Maple Leaf Marathon went to camp scholarships to Camp Brave Eagle. We also donated to La Casa for the help-a-house program.”

Yoder said that Camp Brave Eagle is a summer camp for children with hemophilia.

Runners who finished the marathon were rewarded with medals and a special award was handed out to the first place male and female award winners.

Other than shirts and medals, the marathon runners won the intrinsic reward of contributing to a greater cause.