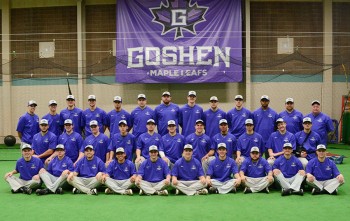 With the weather in Northern Indiana unable to make up its mind, Goshen’s baseball team headed to Georgia over spring break to open their season. The Maple Leafs concluded the trip with a 3-6 record to the start off the season.

The season opened on Saturday, February 20 in a double header against Alice Lloyd College in Emerson, Georgia. Goshen swept the doubleheader with a pair of impressive victories over the Eagles, winning 9-1 and 14-6.

A trio of Maple Leafs, Jesse Quintanilla and Bryan Aponte, both seniors, and Ryan Hartig, a sophomore, contributed two RBIs (runs batted in) apiece in the opening game to lead Goshen’s offensive. Tyler Waslawski, a sophomore, shut down the Eagles offense, allowing just one earned run through six innings of work and surrendering one hit while striking out four.

In the second game of the doubleheader, both offenses found their stride as the teams combined to score 20 runs. Mike Namisnak, a junior, drove in five runs to nearly outpace Alice Lloyd himself.

The rest of the trip was less successful for the Maple Leafs in the win column, as Goshen dropped 6 of their last 7. Many of the games were close up to the end, with a 7-6 loss to Reinhardt University taking three extra innings beyond the original seven innings before being resolved.

Goshen’s third win of the trip came in a comeback effort against Toccoa Falls College on Saturday, February 27. Toccoa led 2-1 with only two innings left to play, however single runs in the sixth and seventh innings gave the Maple Leafs a 3-2 victory.

Quintanilla and Stroble both contributed an RBI and Shail scored off an error to help lead Goshen to the win. Kyle Kotecki, a first year, earned the “W” for Goshen as Michael Walker, a junior, was the starting pitcher and had a strong outing, but was forced to earn a no-decision.

The Maple Leafs return to action on Friday in a doubleheader against Trinity Christian College in Palos Heights, Illinois. The first pitch in the first game is scheduled for 1:30 p.m.