Natalie Thorne bikes her way through Texas, Arizona, and beyond 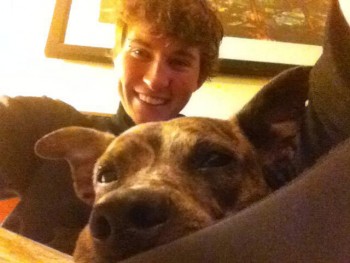 Natalie Thorne, a third year, sends home selfies every day to reassure her family and friends about her solo bike trip across the southwestern United States. Thorne is currently in Arizona and plans to go through California and Oregon in the coming months.
Photo contributed by Natalie Thorne

When the weather is cold, the homework is piling and there is no end in sight, everyone eventually feels the deep need for a break. But not just a week-long break, like the long-awaited one next week, but a longer break to do something without the pressures of work and school.

Natalie Thorne, a junior sociology major, decided that she needed to take a break, but to do something during her break that she has always wanted to do—take a cross-country bike ride.

“She wanted to do something that she wouldn’t have the opportunity to do later in life,” said Ardy Woodward, a junior and close friend of Thorne, who could not be reached for comment due to her travel schedule.

So, instead of buying books like the rest of us at Goshen, Natalie was purchasing bike parts and camping supplies, ready to get on the road for her trip. With her dog, Tilly, as her constant companion, Thorne hit the road in mid-January for her adventure. After she was dropped off in Southern Mississippi by Hanna Hochstetler, a sophomore, and Woodward, she started the journey west with Tilly running by her side—and inevitably wanting to be pulled in the carrier behind.

Thorne is averaging about 60 miles per day with one rest day thrown in a week. She has ridden completely through Texas and is currently in Arizona. Her route will eventually take her up the California coastline and into Oregon by the middle of April. She’ll be back on campus for May term.

Not all of the planning for this trip was necessarily easy.

“There were a lot of unknowns going into it,” said Anya Krieder, a junior, referring to Thorne’s relative inexperience with bike trips of this scale, self-navigation using an atlas and also general safety concerns with not having consistent WiFi, a place to sleep and being the only human along.

To keep her friends and family at ease, she sends a selfie of herself and Tilly every day, which will also serve as a stream of memories for after the end of her trip.

Through all the popped tires, bad weather, discouraging headwinds and pure exhaustion, Woodward said that it seems that “[Natalie] has taken the unknowns in stride” and experiences her trip one day at a time.

Surprisingly, of all the concerns that might plague her solo trip, finding a place to stay hasn’t been one of them.

“She’s experienced amazing hospitality from an amazing variety of people,” said Woodward. “She was planning on camping every night but actually has rarely had to camp because so many people have been asking her to stay in their house.”

The stories Thorne has are innumerable, stemming from the people she has found to stay with to the mishaps on the road and every hard-won mile in between.

“There was a woman she met in the morning during breakfast,” Hochstetler said. “Two towns later, Natalie ran into her again and she bought her a hotel room for the night. And one time she went to a town and a nice couple offered to watch Tilly while she went grocery shopping. Later, she met a couple at a dog park and they offered Tilly and her a place to stay for the night.”

In a smaller town, she was even featured in the local newspaper.

“It’s been cool to hear about the hospitality and generosity of complete strangers that she’s experienced,” said Kreider.

Her friends have a clear sense of pride in Thorne’s accomplishments.

“I’m proud of her for taking a chance on a dream that she’s had and she’s wanted to do for a long time,” said Kreider. “She went for it and it’s been good for her.”

But there is, of course, some sadness in her absence.

“I look forward to Nat’s nightly message and her recap from the day; it’s exciting to see that she’s meeting wonderful people,” said Hochstetler. “I’m excited to see where the rest of the trip takes her…but I miss her!”