Quiet as a mouse, but with a game that speaks volumes 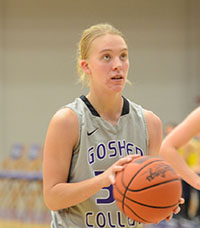 Sophie Sears, a third year, prepares for a free-throw this past season where she has helped her team sport a winning record.
Photo by Maria Bischoff

Sophia Sears, or as most people know her, Sophie, is a junior point guard for the Goshen College women’s basketball team. Throughout her career she has proven to be just what the Maple Leafs are looking for to run the show. Despite her quiet persona, Sears has found a way to lead the team through unselfish play and consistently.

“The girl is quiet as a mouse, but her game speaks volumes,” said Liz Tecca, a senior teammate.

This calm and collected attitude plays a huge role in Sears’ success. Most coaches would agree that they want a point guard that can control a team with that relaxed attitude.

“Sophie is one of the most calm and levelheaded players I have ever coached,” said head coach Stephanie Miller. “She simply doesn’t get too high or too low emotionally throughout a game, which gives her the ability to be a calming presence on the floor for her team.”

Miller also spoke volumes on Sears’ in-game basketball skills. “She has one of the most complete skill sets that I have seen a basketball player have. She can pass, dribble, shoot, defend, and think the game. Her versatility allows her to pick and choose what the team needs at certain times, and step up in those areas when possible.”

When asked who she models her play after, Sears said, “I like to resemble my play after Steph Curry; cool, calm, and collected – minus the shooting part. He’s got me on that one.”

Sears has proved this strong skill set, earning a variety of accomplishments throughout her career. Back home in Paoli, Indiana, at Paoli High School, Sears broke the single game scoring record with 37 points, and also holds the crown of all-time scoring leader for the Rams. These merits, among others, led Sears to being named to the all-state second team her senior season, as well as three consecutive All-Patoka Lake Conference selections.

“I knew Sophie was a special player when I was recruiting her and I am even more excited and proud to have everyone in our league and at Goshen College have the opportunity to witness her growth over the last three years,” said Miller.

Here at Goshen College, Sears has shifted her style of play towards others. Entering Wednesday night’s game, she ranks fifth in Goshen College history with 295 career assists and seventh in the nation in assists this season with 120.

However, Sears hasn’t lost her shooting skills at the college level, as her most notable shooting statistic places her first in school history with a career free throw percentage of 85.9 percent. She continues to raise that career percentage this season, as she currently shoots 93.5 percent (58-of-62) from the line, giving her an eight-percentage-point lead in first place in school history for free throw percentage in one season. This percentage would also make her the top free throw shooter in the nation, but due to her being below the minimum average of 2.5 made free throws per game, she is currently ineligible to be counted in the national rankings.

Sears is also getting it done on the defensive end, racking up 59 steals so far this season. That mark ranks her 19th in the nation this year, and helps her climb closer to the school career steals record of 318. She currently sits in eighth with 170 takeaways through her first three years.

Sears credits her success to great teammates and a coaching staff that allows for flexibility within the offense. “An assist goes both ways. I make the pass, but it is up to my teammate to actually put it in the hoop,” said Sears.

Tecca shared her admiration of Sears’ style of play, saying, “She brings a calming presence to the floor and sets the table nicely. Not only does she play her role very well, but she also allows us all to play our roles. She just gets the job done.”

Put all the numbers, rankings, and praise aside and Sears has only one goal on her mind: winning. “It’d be nice to be in the record book but I’d rather just win,” said Sears. “I absolutely love all my teammates and coaches, and I truly just want to make a run in the conference and national tournaments and make Goshen College proud.”

You can catch Sears and the rest of the Maple Leafs back in action on Wednesday the 17th when they host Taylor University in Gunden Gymnasium.