Another kind of SST 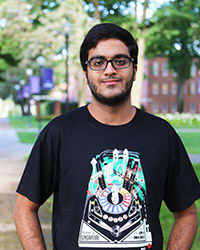 Viren Wadhwa has a cross cultural experience on Goshen’s campus.
Photo by Comm/Mar

Since I moved out of India when I was 2 years old, and have been living in Singapore ever since then (almost eighteen years or so), it’s hard to associate myself as to where I am from.

Depending on how I feel, when I am asked where I am from, I may say Singapore, or I may say India. But I went to high school in South India from 2009 to 2012.

The first day I got to Goshen in fall 2012, I was lost. I kept thinking to myself, “how am I going to live in a place that I have never been, for the next 4 years?” I was scared.

The next day it was time for lunch (11 a.m.?!). I thought to myself that people here must be crazy to have lunch at 11 a.m. Then when I heard that they have lunch at 11 a.m. and dinner (I had never heard of the word supper until I came to Goshen) at 5 p.m., then I got the joke. No seriously, because back home lunch would be at 3 p.m. and dinner at 9 p.m. Talk about cultural difference number 1.

My first class was at 9 a.m. I thought I could go to class by 9:15 a.m. or so and the professor still wouldn’t have shown up. I was so wrong. I realized that not only was the professor already in class when I walked in at 9:15, but I was the last student to walk in. Then it struck me that just because I could do this in India didn’t mean I could do it in the United States. Cultural difference number 2.

We take pride in speaking as quickly as we can in India. Yes, I did speak quickly among my friend circle here, and YES no one was able to understand me. Just because I spoke too quickly, they thought I was speaking Hindi (some other language that also happens to be my second language). Cultural difference number 3.

To go? Gas station? Check out? What was all this I was hearing? I wondered to myself. Oh yes, it’s the United States, they want to be different from everyone else. Soon I realized they meant take-away, petrol pump and cashier. Cultural difference number 4.

It took me about 2 to 3 weeks to deal with the culture shock that I was in after having lived in Singapore for many years, and then coming to the land of opportunities.

I thought the whole concept of SST was funny. For me, SST was flying twenty-eight hours to get to Goshen (from Singapore). But seriously though, I feel like coming to the U.S., which is so different from back home, was a unique SST experience for me. Then I find out there are SST alternative classes that I get to take on campus. Soon enough I realized that SST is one of GC’s strengths.

Oh yes, let’s talk about the weather. Having been here for almost 4 years now, it was funny having a first-year tell me that it’s cold. I told him, “You mean -5 or -10 Celsius cold?”

“Remember the polar vortex 2 years ago, when the temperatures were as low as -30? Oh yeah, too bad, you guys weren’t even here,” I said.

“Yes, I heard, you guys got a day off because of the snow. That must have been fun,” he said.

“It was so much fun, man, being buried in one and a half feet of snow,” I told him.

My time at GC has been one that I will never forget! I have treasured each and every moment here at Goshen.