Softball gears up for 2016 season 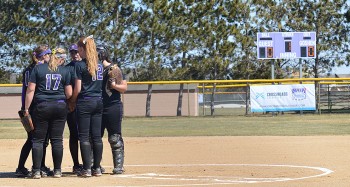 Members of the 2015 softball team meet at the pitcher’s mound before a home game.
Photo contributed by GoLeafs.net

Spring offers the opportunity for a clean slate and fresh start for the Goshen College softball team. The Maple Leafs return to the diamond with hopes of improving upon last season’s 5-42 record. In her third season as head coach, Kristen Kolter enters the new season with an eagerness for growth.

“Throw out the record last year, and I thought we were pretty dang competitive,” said Kolter. “If we can figure out how to finish games and improve each day, I think we have a shot to be a contender in the Crossroads League.”

This year’s roster includes 10 new faces to the program, with eight first-years and two transfer students joining the team. They will join an experienced roster of two sophomores, four juniors, and five seniors for a total of 21 players.

The ladies will look to Sam Langley, their senior shortstop, to help pick up the slack both offensively and defensively. Langley enters her final season in a Maple Leaf uniform with an all-conference honorable mention award from last year under her belt. Langley was second in batting average last season, hitting .314 and trailing only Meyer (.438).

Joining Langley in the .300 batting average club from last season is Miranda Robles, a junior, who posted a .302 batting average and led the team with 24 runs batted in (RBI) and four home runs last spring.

With an offensive focus this offseason, Kolter believes Goshen will see drastic improvements this season. “With the new turf room, the women have put in more work this offseason than ever before, and I think that will prove to make a huge difference on the offensive side of the game,” she said.

On the mound, the Leafs have added Rae Ann Miller, a first-year pitcher, to provide a steady presence. “I’m really excited about having Rae Ann on the mound this year,” said Kolter. “Just like any freshman, I think she is going to struggle with the learning curve, but I think there is enough experience around her for her to be successful.”

Krista Sutliff, a junior, and Abby Flickner and Kourtney Mueller, both seniors, also add experience and depth to the roster.

The ladies are also excited for the addition of their new assistant coach, Chelsea Eli-Kido. Eli-Kido is a 2015 graduate of the University of Antelope Valley in Lancaster, California, where she played softball and received a degree in criminal justice.

“Coach Eli-Kido provides extra energy and knows how to push us to our limits,” said Langley. “I think she has helped us improve in all aspects of the game I’m excited to see our hard work pay off.”

The Maple Leafs begin their season over Goshen College’s spring break as they travel to southern California to play in a tournament at Biola University. It begins on February 19 against Hope International University. The team then finishes their trip with a doubleheader against Marymount California University in San Pedro on February 24.