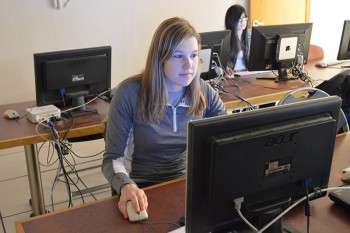 Meghan Gerke works in the computer lab at Goshen College, where the Global Game Jam will be hosted.
Photo by Maria Bischoff

This Friday through Sunday, Goshen College will be hosting their second Global Game Jam. Throughout the course of the weekend, up to 40 participants will engage in programming, iterative design and artistic expression in the process of their own game creation.

The first day of the event will be held in Umble Center this Friday, from 5:00 p.m. to 10:00 p.m. At this time, participants will watch a keynote video with advice from leading game developers, and then the secret theme will be revealed.

After the theme is revealed, all participating sites worldwide are required to use this theme to inspire the creation of their own games. The release of the video includes time zones from New Zealand to Hawaii.

The goal of the Game Jam is to create an end product of either a video or a non-digital card or board game based on the criteria within the 48-hour time period.

All final projects are protected under the Creative Commons License for a year, and then returned to the team that created the game.

Jeanette Shown, enrollment database manager and analyst, said that along with the challenges of organizing and creating a game, participants face a different challenge of finding teams.

Teams are created on the first day of the event, as well as project proposals. A team from Ball State will be joining the Game Jam in addition to the 28 participants that have already registered.

Mathew Pletcher, a senior computer science major said, “This year, participants are going to be placed into groups by the event organizers to distribute talent throughout the different teams. Most everyone will need to learn to work with people they haven’t before.”

According to Shown, “Participants range from people in the surrounding communities to students from Goshen College.”

Although having computer skills is helpful, it is not required. Anyone over the age of twelve is eligible to register. Designers, developers and artists along with people from all experiences are encouraged to participate.

Pletcher said, “The event brings the opportunity for students and community members to work together and produce a software product. Since not all participants are programmers, there is opportunity for people of different disciplines to see how others work.”

According to the Global Game Jam’s website, the success of the program is based on the idea that anyone can come together, create, share and express themselves in many ways; all connected through video games.

With locations in 78 countries and over 28,000 participants in 2015 alone, the event earned its “global” title for being the world’s largest game creation.

Along with the staggering number of participants last year, over 5,000 games were produced worldwide over the span of the weekend.