Resident Life’s man of many hats since 2002 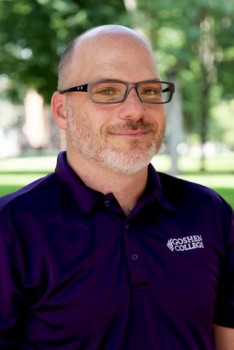 Chad Coleman has worked at Goshen College in various residential roles since 2002, when he started as the Yoder Resident Director
Photo provided by Goshen College

Overseeing intramural sports, serving students and planning for the future are just a few of the things that Chad Coleman does as a part of his job as the director of residence life.

Coleman grew up outside of Goshen, near Dunlap, Indiana. He attended Northridge High School and then went on to Indiana University in Bloomington. Originally he wanted to be a sports broadcaster, but found out how difficult a career that was to get into. Instead, he found he enjoyed being in an educational setting and eventually started looking at working in a college.

“I had a former friend’s uncle or grandmother’s brother kind of deal who had worked here [at GC],” said Coleman. “I thought, Goshen is local and I saw the resident director job, and honestly I really had no idea, when I applied, what it really was.”

He got an interview and found out what he would be doing. He worked as a resident director for six years for Yoder Hall. “It was what I would call a cool job,” he said.

“It was much more fraternal back then,” said Coleman, in regards to relations between Yoder students and Kratz and Miller students. “I had a home theater set up in the Yoder apartment.” Sometimes up to 40 students would show up.

In 2008, Coleman moved to being the resident director of Kulp, Coffman and small group housing while he worked on his master’s degree. In 2010, he was offered to oversee intramural sports as well. At this time, the associate dean position was being refocused. It was then that Coleman was asked to take over the whole department along with intramural sports.

Currently, Coleman oversees a variety of things, like many of the campus life programs, along with intramural sports. He works with the assistant directors of resident life for the student apartments and Kratz and Yoder Halls. Coleman also still works with people living in the small group housing and Kulp Hall.

“A lot of the week is spent with the various groups…there’s a lot of meetings, a lot of collaborations that aren’t routine,” said Coleman.

However, one thing that remains the same each day is that Coleman eats in the cafeteria for lunch as a way to be accessible to the students. Coleman also works in Java Junction on occasion, “as an accessibility factor.”

“I have found that by being there I have gotten a lot of walk-ins,” said Coleman. “I will say that every decision that’s made in my office is always for the benefit of the students, the institution and things in the long term.”

In his downtime, Coleman said he enjoys following sports teams and staying caught up with the latest technology.

“I will buy new and resell a year later, which isn’t normal,” said Coleman. He takes to Twitter to talk about technology and Facebook to talk about sports, and said he is “famous for my sports rants.”