A blast from the past Saturday 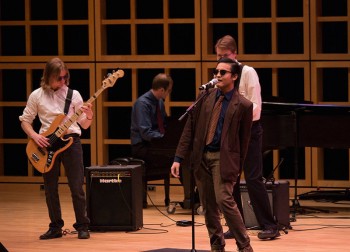 As many of you already know, Kick Off (aka, Goshen’s semi-annual rehash of the same ten singers from open-mic night) took place with great success. If you weren’t able to make it, don’t worry. I have all the scoops and details for those who missed it along with my own arbitrary ratings.

The show opened with a song titled “Little Lion Man.” Much to my disappointment, and I’m sure many other feline lovers, there were no lions to be found, let alone any “little” ones. This would certainly score higher on my list if only they didn’t lead me on. 6/10.

Sara Azzuni excelled at speaking on behalf of something she believes and lives in. Beware her anger. 10/10.

Naomi Peters graced our ears with her rendition of “My Immortal.” But when I began crying halfway through, she was not there to “wipe away all of [my] tears.” False promises. 7/10

As Abe “Mr. Burgundy” Medellin took the stage, I was sure we were in for a special surprise guest appearance for Will Ferrell’s next Anchorman film, but alas, it was a one-man show. He kept my attention. 4/10.

Hannah and Cassidy performed a slightly longer version of the tappity-tap-tap-tapap-tappity-tap dance we have all seen before. Arms were flailed and feet were moved, so good job. 5/10.

The Groove Merchants came out of nowhere. Galed Krisjayanta’s chocolaty smooth vocal chords satisfied all our orifices, but especially our ears. Also, I was in that act so it must have been something special. 9/10.

The Divas followed that act. Sadly, I had to make a quick stop at the bathroom and completely missed it. But based on the name and the music I heard through the speakers, I assume it was a very rhythmic demonstration of how Diva Cups work. Practical and catchy. 8/10.

James Lang followed it up with a soulful performance alongside Ike “To-Cool-For-School” Lehman on the guitar. I would have rated this higher if Mr. Lehman didn’t look like he just walked in from the streets. 5/10.

Adrienne and Diana came next and wowed me with their words. I honestly didn’t understand much…but there was passion. 5/10.

Last and also least, the Indiana Bible Company found themselves onstage, not to be confused with any of the other states’ Bible Companies. They played well but I was a little dissatisfied in their ability to jump around. If they had worked their quadriceps a little more before performing, they would easily be my top pick. 3/10.

And CAC, who sponsored this event, really went all out with the roarin’ twenties theme this year, including black signs with gold tape on them and a black curtain with gold streamers and…well, that’s about it. But at least they excelled at serving food in the most efficient way during the after party. 3/10.