From England to Goshen with a soccer ball 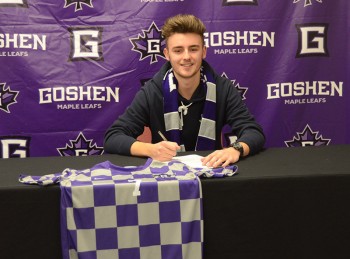 Ollie Smith is a first year from Thirsk, England. Ollie transferred to Goshen at the start of this semester and is on the men’s soccer team.
Photo by Maria Bischoff

The start of a new semester can mean students transferring to a different college for any number of reasons. For Oliver Smith, transferring to Goshen meant the opportunity to play soccer for a new team while furthering his education.

Smith is a first year student from Thirsk, in the northern part of England. Moving to a new country may seem like a big leap, but he is not the first to move to Goshen for a sports team.

There are two other students on the team from England, as well as three other students who are from Trinidad and Tobago, Zimbabwe and Paraguay. Some of the other Goshen sports teams also have several international students from countries like India, Norway and Ecuador.

“I transferred to Goshen because it was a great opportunity for my soccer and education,” said Smith. He learned about Goshen when Coach Arron Patrick got into contact with him after seeing footage of Smith playing soccer.

Smith has been playing since he was eight years old and has played for several teams both in clubs and in schools, including Middlesbrough Development Centre and Darlington Academy.

When asked about what he is studying, Smith said he has chosen kinesiology in order to pursue a career in the sporting world.

“Ollie will be a great addition to the team,” said Patrick. “Not only is he a great player, but he’s a very good student.”

Patrick thinks Smith will be something new to the Goshen team and said, “I believe he will provide us with goals and assists immediately. He’s definitely one to watch next season.”

Smith’s goal for himself here at Goshen is to “become a better player physically and technically.” He also hopes that the soccer team will reach the national competition in the fall.

According to Patrick, Smith has already started to get along with the other players off the field, and Patrick looks forward to seeing him “join the rest of [the] guys as leaders around the campus.”

When asked what he’s noticed the biggest difference between the United States and England is, Smith said that the people here are more kind.

“In England there would be no exchange of conversation with a stranger,” said Smith.

Ultimately, Smith has settled into campus life here at Goshen and is looking forward to the opportunities that campus has in store for him.

“I’m enjoying it here so far,” he said. “The people are so friendly and helpful, [and] the facilities are great here. However, the weather is colder than I anticipated.”