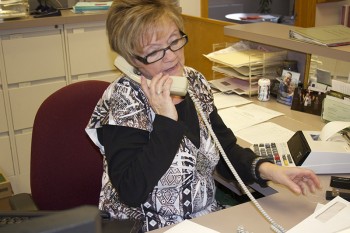 Shirley Shriner, administrative assistant, will retire at the end of May.
Photo by Frances Fonseca

Tagged as the “do it all girl” by her colleagues, Shriner never sees a dull moment. A common day would consist of answering phones, processing reports or answering the array of questions from students here at Goshen College.

“I certainly can’t say I was ever bored with my job,” said Shriner. “Our campus has such a creative and fun energy that has kept me enjoying my job for all these years.”

Shriner is known for her laid-back and easy-to-get-along-with attitude.

“She is just fun to have around because of her great sense of humor about things,” said Chad Coleman, student life director. “I like that I can vent to her about the trials and tribulations of residence life and she totally gets it.”

“My favorite part of my job is the interaction that I have with the students,” said Shriner. “I can’t even begin to think about the number of students that have come through our offices over the past 20 years.”

Shriner also mentioned that she values these encounters because, believe it or not, some of them last a lifetime.

“It’s always fun to see students graduate and come back as alums for a visit and stop in and say hello,” said Shriner.

Throughout Shriner’s 21 years of service here at GC, she has provided leadership and support to all parts of student life, according to her colleagues.

“Shirley is my encyclopedia,” said Coleman. “In her 20 plus years here she has accumulated so many little tasks that go unnoticed by most people because she always has them done. This is what scares me about replacing her—that there are things that she has done for us for so long that we couldn’t possibly expect her successor to know about.”

As she looks to wrap up her 21 years of service here at GC, Shriner said that she has loved each day, but is looking forward to the easy life.

Shirley has been married to her husband Steve, who works at GC part time, for 42 years. Steve and Shirley have two children and three grandchildren.

“I am ready to have a much less hectic pace of life and enjoy more time with my grandkids—[I want to] travel and just enjoy life,” said Shriner.

“I’ve always told Shirley that she is the ‘nuts and bolts of student life’ while the rest of us are just ‘nuts’ if you leave us,” said Coleman. “She is so often reminding me of things to get done, so much that I’ve jokingly asked her in the past to give us a 3-year notice so we could properly train her replacement.”