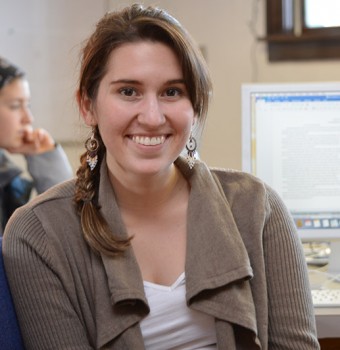 Anna Cullar, a third year nursing student, transferred to Goshen at the beginning of the school year.

Transfer students add a new dimension to our student body every semester. They come as new faces, new perspectives, and new friends. Anna Cullar isn’t your typical transfer student, however. She is a nursing major here at Goshen College, but she spent the first part of her education at Conrad Grebel University College in Waterloo, Ontario as an English major.

Cullar chose Conrad Grebel for a variety of reasons. To start, she has dual citizenship in the US and Canada, allowing her to take advantage of Canada’s cheaper college costs.

She also loved the appeal of a small liberal arts college with a Mennonite background. What’s more, Conrad Grebel is connected to the University of Waterloo, meaning that she could go to a small, close-knit college but also have the class options and diversity of a large school.

Cullar said that being an English major was what came naturally to her at first.

“English was an easy choice coming out of high school,” she said. “It’s something I’ve always been good at, and I love studying it so much. But after my first year I had a gut feeling that I had something I liked, but not something I could do for the rest of my life.”

That was when Cullar decided to look to nursing.

“When I was little I never wanted to be a nurse,” she said. “But in high school and after, nursing became more and more appealing to me.”

The summer after her first year at Conrad Grebel, Cullar started talking to more nursing majors and nurses. Their experiences further solidified her wish to be a nurse as well.

“I was jealous of them,” she said. “Because they could be nurses and I couldn’t.”

There was a big problem though. Cullar didn’t want to leave Grebel.

“I really didn’t want to leave, but I wanted to change my major to nursing,” Cullar said. “Nursing works differently in Canada. I would have had to do another four years instead of two. So, I went back to the States, not knowing what school I would end up at in the US.”

So, Cullar began looking. She withdrew from Conrad Grebel after the fall semester of her second year and began taking classes at a community college close to her home in Ohio during that spring. But Cullar quickly knew that she couldn’t stay at home for much longer.

Cullar had a small liberal arts school in mind, but she didn’t know which school she would ultimately choose. She actually wasn’t planning on coming to Goshen until she got connected with Brenda Srof, head of the nursing department.

“Once I got connected to [her], it became easy to transfer here,” Cullar said. “It was a quality of life decision over staying at home. I feel okay about coming here. I was worried about finances, but I ultimately felt comfortable about it knowing that I had a really marketable degree. And it’s paid off. I’m happy here.”