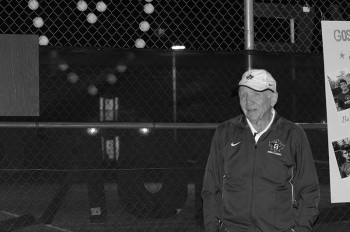 Stan King, the men’s tennis coach, will be retiring after 17 years at Goshen College.
Photo contributed by goleafs.net

Stan King, longtime head coach of the Goshen College men’s tennis team, recently announced his retirement at the conclusion of the 2015 season. And with King’s decision brings change. Big change.

King served as the head coach for the men’s tennis team for a total of 17 seasons and amassed 106 team match wins—the second highest number of wins of any coach in the history of the athletic program behind Jim Routhier, the current volleyball coach (109).

King was a 1961 graduate of Goshen College with a biology major, and competed in both #1 singles and doubles on the tennis team. King went on to complete graduate school at Ohio State University, earning a master’s degree and a PhD in plant pathology.

King’s business career as a plant pathologist took him many places around the world, including Nigeria, India and Kenya.

After moving back to the United States permanently, King found himself back at GC in 1999 as the new head coach of the men’s tennis program.

“Coaching men’s tennis and being apart of the GC community was a privilege and fulfilling experience for me,” said King. “I am grateful for my four-year experience as a GC student many years ago, and am now indebted to those who have given me the opportunity to serve as the men’s tennis coach.”

Throughout his years at the helm, King has been known for his work on and off the court.

“Stan did a phenomenal job of building our men’s tennis program into something special on the court,” said Josh Gleason, GC’s athletic director, in his press release announcing King’s retirement. “More than that, he was passionate about using tennis as a means to build lifelong connections between teammates, a way to gain a world class education and ensuring his student-athletes headed into the world with the tools to succeed in all areas of their lives. His players often looked at him as a second father and they had a great role model in Stan to do so.”

With the face of the program out, what is next for the men’s tennis program?

Josh Gleason and the athletic department recently announced that they will be creating a new position called the director of tennis, which will be one individual who is responsible for administrating, recruiting and coaching both the men’s and women’s tennis programs.

Doug Gossman, former women’s tennis head coach, will now serve as the assistant and instructor for both the men’s and women’s teams.

The search for the next coach is underway, as the athletic department has formed a search committee and is currently reviewing applications.

“We are looking for someone who not only knows their sport, but someone who can build a team and program, maximize potential of student-athletes on and off the court, mentor student-athletes into better people, recruit student athletes who will have a positive impact on campus and teams, supports the institution and someone who adds positively to our department goals,” said Gleason.

With a bittersweet feeling in the air, the only question is: who will fill the shoes of a King?