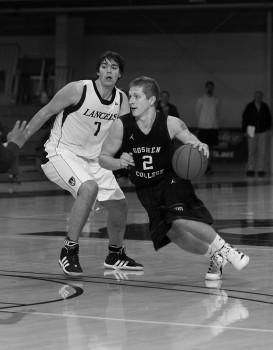 Kody Chandler returns to the court for Goshen College Basketball, and shows off his skills against Grace College.
Photo contributed by Goleafs.net

Chandler came to Goshen as a highly touted recruit. As a 6’1” guard out of Schoolcraft High School in Michigan, Chandler was a two-time all-state winner and Kalamazoo Gazette player of the year.

In his high-school career Chandler averaged nearly 22 points per game and went on to two state finals. As a senior, Chandler led his team to an undefeated season and state championship. Following his senior season, Chandler decided to continue his career as a Maple Leaf.

“I knew and had played with three guys already on the team, and really thought we could be something special,” Chandler said.

As a freshman, Chandler did not disappoint. Leading the team in scoring, averaging 14 points per game, Chandler earned third-team all-conference and all-newcomer team honors. The team started off 13-1, but the wheels seemingly fell off the bus as they finished the second half of the season with a 5-12 record.

Chandler and four others decided to take their talents elsewhere. “I was looking for more in a program,” he said. “I didn’t quite agree with the coaching staff at times, and I really felt I needed a greater challenge. Looking back at it, I was definitely a little immature and probably didn’t make the wisest decision at the time.”

He moved on to Indiana Tech. “I decided to go there because it was a more competitive NAIA program that I could start at right away,” said Chandler.

Chandler quickly learned he made the wrong decision. “The coach and I butted heads a lot, and it caused me start to hate basketball,” said Chandler. With the loss of passion for the game, Chandler decided to quit Indiana Tech after his first season and take some time off of basketball. He signed up for online classes at Western Oklahoma State University.

Chandler moved on. This time it was a small Division III school, Olivet College, in 2014. His stay at Olivet was once again short-lived –only a semester. “Olivet was just way to uncompetitive,” he said. “It wasn’t a good fit academically or athletically. I didn’t view myself as a Division III athlete.”

“I considered pursuing a professional career overseas, but got advice to build my game by staying in college,” he said. Due to being viewed as a risky player, not many colleges were willing to take on Chandler.

“I had no clue what to do. No program wanted me,” said Chandler. With nearly no other options Chandler decided to swallow his pride and contact Goshen. Head coach Neal Young, who was an assistant when Chandler was a freshman, was willing to give him another shot.

“When you are a head coach or leader of any organization or team you will find that oftentimes the most talented individuals will bring some baggage,” Young said. “A huge part of my job is evaluating each individual and their story independent of all others.”

“What I found in Kody was a genuine sense of humility, multiple signs of maturation, remorse for how things ended last time and a very intense desire to return here and essentially prove to people that he isn’t a washout, or a failure. I have full confidence that the end of Kody’s story at GC will be one of growth, perseverance and success,” Young said.

In accordance with the National Association of Intercollegiate Athletics (NAIA) transfer rules, Chandler will have to sit out this season. Chandler will have two years of eligibility on the court, giving him time to focus on building his skills and majoring in psychology.

Just a couple weeks into practice, Chandler is quickly learning how to be a leader. At 22, Chandler is the oldest player on the team. With age comes experience, and Chandler has a lot of advice and wisdom to share with his teammates.

“I truly think Goshen is where I’m meant to be,” he said. “I’m blessed and fortunate to get another chance, and I promise I won’t disappoint this time.”