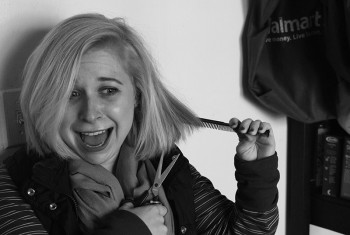 Senior Halle Steingass attempts, and fails, to cut her own hair.
Photo by Lynelle Leinbach

Several Goshen College students are in the process of working with MCC to provide relief kits for refugees, specifically for people feeling fleeing the Syrian Civil War, ISIS, and complications stemming from this regional instability.

These kits include necessary hygienic items for those who are starting over and are items that any Goshen College student can contribute, including bath bar soaps, shampoo, laundry soap, toothbrushes, bath towels, wide-tooth combs, fingernail clippers, adhesive bandages and sanitary pads.

There are also many opportunities to make monetary donations for the kits.

“At Night at the RFC, students can pay money to throw pies in their professors’ faces and the proceeds will also go to the kits,” said Miller, a member of Student Senate. “In addition, students can either pay $5 to get into Kick Off or donate one or two of these items. Students can also vote during kick-off to give the money collected to this effort.”

Additionally, Halle Steingass, a senior, is giving people haircuts and donating that money to the cause. Each haircut cost $3, and Steingass is an experienced stylist.

She has been giving people haircuts since her freshman year, and has been donating the money she makes to MCC to use where it is needed. This year, that means relief kits.

Steingass is still looking for new ways to contribute.

“There is so much more that can be given, and this is just a small step,” she said. “But this is giving a little bit back to people who have no home and trying to find a place to be.” Steingass can be contacted via Facebook or email at hesteingass@goshen.edu. The items for the kits can be dropped off outside of Java Junction.