‘When Life Hands You Lemons, Check for Lymes’ 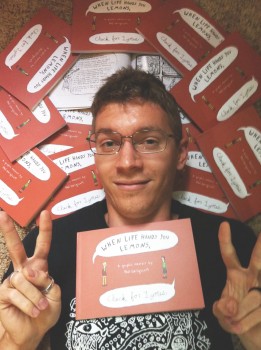 While this might sound like just another variation of the age-old phrase, it is actually the title of a new book, recently published by Goshen alum, Phil Gerigscott. The book is a short autobiography about his journey with Lyme disease and covers the ins and outs of his treatment with humor, optimism and word play.

Gerigscott graduated from Goshen in 2014, but his journey with Lyme disease began two years prior.

Gerigscott unknowingly contracted Lyme disease through a tick bite during the summer of 2012 and spent the next two years dealing with symptoms and looking for a diagnosis. Originally causing pain in his knees, the disease spread to places such as his wrists and eventually made favorite activities, such as playing guitar, impossible.

“I’m a person who likes to have a project going,” said Gerigscott. “I always like to be doing something. After I couldn’t play the guitar anymore, I decided to start doing comics about my life at the time, just to keep me busy.”

Gerigscott started carrying a small notebook around, recording life events he thought were interesting. Eventually, he had a large enough collection to put his journey into a book.

While considering his time at Goshen, Gerigscott fondly recalled his time doing comics for the Record.

“I loved doing stupid doodles in elementary school,” said Gerigscott. “Then in college I started doing comics for the Record. I think that’s really where I got the three- and six-panel style I used in the book.”

Through an art education major, Gerigscott presented two small graphic novels in his senior art show. “It was sort of a dichotomy for me, I guess” said Gerigscott. “I didn’t really think about comics being actual art until my senior year.”

This change of mind eventually led to the publishing of his book. Gerigscott used a Kickstarter campaign and sold 68 pre-copies, which gave him the confidence and money to start publishing.

“I think the genre is really expanding. Graphic novels can be considered literature and there is a subset of medical memoirs. It’s a good time for a book like this,” said Gerigscott. Gerigscott is currently an art teacher at Prairie Street and produces art projects in his spare time.

At this point, Gerigscott doesn’t know if more publishing is in his future. “This book really came about because of things that happened in life. I liked the project, but I’ve also been getting into music and painting.”

Gerigscott stated that he liked to share his completed projects with others, as books or musical albums. “It’s really satisfying to see it sitting there, all complete and one thing, not just doodles in a notebook.”

The book covers the serious aspect of having Lyme disease with humor and aspects of everyday life.

“Painfully optimistic, that’s what one of my friends called it,” said Gerigscott. “I really like it because it’s honest. I think when you consume honest art it’s eye-opening and awakening, about yourself and about life. Maybe you relate, maybe you don’t, but it’s about connecting and understanding. It helps tell my story without dragging people down.”

Gerigscott hopes to take the book to some conventions in Chicago, and try to share it with more people.

“I want to see what it’s like when people who don’t know me read it,” he said.

The book is currently available at Better World Books downtown, and Gerigscott attends First Fridays for book signings. It is also available on Etsy, under the username Philphactory.