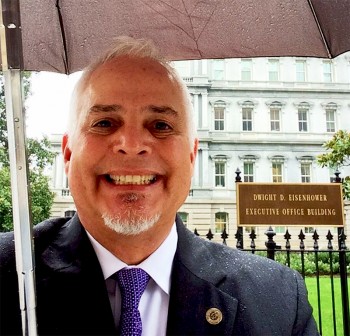 President James Brenneman takes a selfie outside the White House on Thursday, Nov. 19. He attended a discussion on environmental issues and sustainability, along with 50 other college leaders from around the U.S.
Photo contributed by James Brenneman.

The Goshen College campus was surprised on Thursday, Nov. 19 to find out, after the fact, that our president, Jim Brenneman, had attended a meeting at the White House.

On Nov. 11, the college received word from White House executives that we may be one of 50 colleges from around the country invited to attend a round table discussion about sustainability and green initiatives on college campuses.

The official invitation and plans were not finalized until Monday, Nov. 16, just three days before the event.

“This whole thing was embargoed to the press until after the event,” said Brenneman. “No press was allowed in the event itself, and we were not allowed to say who said what, per se. Only after the event were we allowed to report on what happened.”

The event gave representatives from these green colleges the chance to share about the initiatives they have started at their schools, and to bring to the table suggestions on ways the government can help in progressing initiatives.

This event was important not only to the colleges in attendance, but also to President Obama himself, as he headed into a week of meetings and negotiations about actions on climate change in Paris this week. Moving forward with action against climate change is one of Obama’s biggest goals before the end of his term.

“It is precisely through President Obama’s convening power in bringing together such gatherings that he uses to make the political point in moving the ball of sustainability down the court,” said Brenneman.

Some of the officials at the meeting were Gina McCarthy, environmental agency administrator; Christy Goldfuss, the White House council on environmental quality’s managing director; and Karen Fiorini, the State Department’s special envoy for climate change issues. All three of these women are leaders in the country’s climate change initiatives. They facilitated the meeting and took notes on suggestions made.

Brenneman was encouraged by the outcome of this meeting and believes that Goshen is “as committed as ever to be a leader in sustainability, ecological stewardship, environmental awareness and practices.”

Some of the college’s biggest accomplishments in making the campus sustainable have been switching to 100 percent renewable energy sources for electricity, converting 20% of the campus’s lawns into natural prairie land, using LED and motion censored lights and using solar power to heat water in the Recreation and Fitness Center.

President Brenneman was one of the first college presidents in Indiana to sign the President’s Climate Commitment in 2007. Since then, the ecological stewardship committee and GC’s Climate Action Plan were created to hold the college accountable in their commitment to working towards a more sustainable campus and decreasing the college’s carbon footprint.

In the future, President Brenneman hopes to uphold the standards that the college has already created, but continue to make progress in the college’s sustainability. “We will not stop now. [We’re] as committed as ever to be a leader in sustainability, ecological stewardship, environmental awareness and practices.”