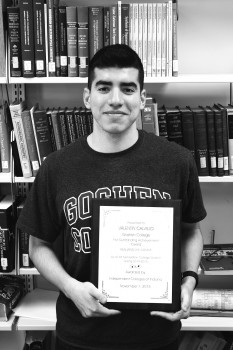 Valentin Calvillo was a recipient of the 2015 “Realizing the Dream” scholarship.
Photo by Sadie Gustafson-Zook.

Calvillo, a sophomore, is a first-generation student.

“[My parents] were really proud of me because I decided to go to college,” Calvillo said.

But his goal isn’t simply a bachelor’s degree; Calvillo is aiming for medical school.

Majoring in biochemistry, Calvillo wants to become a general surgeon, or do something related with surgery.

“I feel like access to medical care should be a fundamental human right,” said Calvillo. “But in a lot of developing countries, people don’t have that.”

Calvillo hopes to work with an organization like Doctors Without Borders or the Red Cross in order to go overseas and “help out people who truly need medical help.” He would like to travel to Palestine, Syria or maybe Africa—anywhere that there is a need.

“A lot of doctors do it for the money,” Calvillo said. “The money is nice, but there’s more to life than just money. There are things that give you more meaning.”

On Nov. 7, Calvillo traveled to Indianapolis for the “Realizing the Dream” banquet, where he and nearly 35 other first-generation students from colleges across Indiana were honored. Each student was awarded a $2,000 scholarship.

“Besides the monetary help, it helps reinforce the idea to keep doing what you’re doing,” said Calvillo. “Obviously you’re doing something right.”

The students also selected a teacher or mentor that had been influential in their lives. Those significant people received $1,000 for educational purposes. Calvillo selected Josh Duell, his student resource time teacher at Goshen High School.

“[Josh] was always after me, making sure I had top grades,” Calvillo said. “Whenever I had a question, I would talk to him. Most of the time he’d have the answer.”

Calvillo has found that having people in his life that he can rely on for help has been a key part of his success.

“It feels great to have someone to lean on and push you,” Calvillo said. “You’re doing your own thing, but there’s someone who’s looking after you.”

Calvillo was nominated for the Realizing the Dream award by DaVonne Kramer, coordinator of retention and intercultural student support, as a first-generation student who shows student leadership roles. Calvillo is a resident assistant and a member of Student Senate, among other things.

“It was a nice experience to go to Indianapolis and have people appreciate the hard work you’ve done in the last couple of years,” Calvillo said. “It helps keep me on track, knowing that I’m doing something right.”