Who really goes to orchestra concerts? 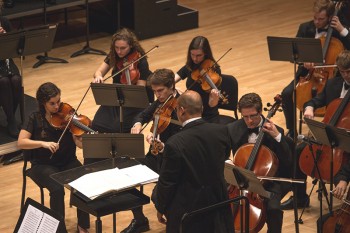 Last Friday evening, the Goshen College Symphony Orchestra performed our fall concert in Sauder Hall. If you don’t know me, this is my third year playing in the orchestra with the violas. Based on experiences from previous years, some of my fellow musicians and I were lamenting the fact that Sauder Hall would undoubtedly be only sparsely filled on Friday night, especially compared to the crowd choir concerts typically draw in.

However, by the time the lights in the hall dimmed and we were preparing to play, I realized that the audience was actually pretty full. After taking a closer look at the demographics of the audience, it was clear that a majority of our supporters were the grandparents visiting their grandchildren for the third annual Grandparents Day. This is the generation that I always think of when I picture the people who attend our concerts. Another good-sized portion of the audience consisted of familiar faces of family, community members and GC faculty.

What was even more exciting was the fact that nearly three whole rows in the front were taken up by college students. Three rows may not sound like a whole lot. Even when you add the clusters of other students sitting in the side rows in the back, the proportion of my peers to their grandparents and others in that generation was very small. All things considered, it was more students than I remembered attending at concerts in previous years, perhaps due to the added incentive of convocation credit.

I can’t help but wonder what the audience size would have looked like if the concert was not worth a swipe for convo credit or if it did not occur on Grandparents’ Day. How many more empty seats would there have been without these added incentives? Now, I’m not questioning the motivations of the student body in attendance, nor do I want to hypocritically guilt trip those not in attendance, because I certainly don’t go to all of the events on campus. But still, it’s not fun feeling like relatively few people actually enjoy going to hear the music that we had been practicing and polishing for the previous nine weeks. After all, what would be the point of making music if no one heard it?

I, along with my fellow musicians, have often felt that the choirs get much more emphasis and attention than the orchestra. One of my main arguments in this article was originally going to be that the Goshen College Choirs receive so much more publicity and promotion for their events than the Symphony Orchestra does. Unfortunately, (or fortunately, I guess) I discovered that I was wrong. In doing more research through the many modes in which music events are announced and publicized, I did not find that there were any more announcements about the Fall Choral Concert than the Fall Orchestra Concert. The music center faculty, or whoever is in charge of announcing events on campus, is not to blame for our impression that the orchestra is underappreciated by the student body.

Which leads me to my next question: why is it that the older generation values orchestral music so much more than my generation? A recent experience with my grandparents made me begin to reflect on this topic. I was sitting in the Fraker eating lunch and listening to my grandparents reminisce about their days when they were students at Goshen College, which eventually led to a discussion about the college radio station. Until fairly recently, 91.1 was known for playing mostly classical music. Since The Globe has become “culturally progressive,” to my knowledge they have stopped playing this genre of music. While The Globe may consistently win awards, my grandparents are very sad that they no longer have access to some of their favorite music.

Adding classical music back to the college’s radio station is not necessarily a demand that has been made by the student body. For many in my generation, music typically played by orchestras feels inaccessible and less engaging than other genres of music. Choral concerts, on the other hand, usually feature pieces that are shorter and more similar to the music that students listen to in their free time.

The truth is, I would say that a majority of my generation does listen to orchestral pieces, and believe it or not, I think they even enjoy them. From Tchaikovsky’s 1812 Overture in V for Vendetta, to the Overture to the Marriage of Figaro by Rossini in Shawshank Redemption, there are countless examples of movies in which classical music plays an important role. And when I say countless, yes, I really mean a lot. Ever watched “Ferris Bueller’s Day Off,” “Bend it Like Beckham,” “The Grand Budapest Hotel,” “Birdman,” “The Breakfast Club,” “The Exorcist,” or “Zoolander?” You’ve listened to classical music. And whether you can admit you liked them or not, these pieces created suspense, emotion or even comedic effect that helped make these movies so great. Orchestral music may not be as boring or elusive as it may appear.

On behalf of the Goshen College Symphony Orchestra, I would like to thank the many people who do support us, especially the GC students who come to our concerts. To those who didn’t make it, I would encourage you to consider being a part of our audience in the future; you may enjoy the experience more than you expected.