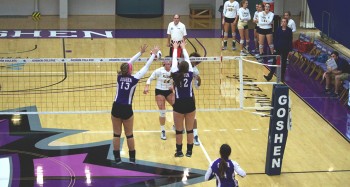 The Leafs go up to block against Mount Vernon in their last game this year.
Photo by Maria Bischoff.

The Goshen volleyball team saw their season come to a close this past Saturday, as the Leafs fell in the Crossroads League Quarterfinals to the Cougars of Mount Vernon Nazarene.

Whitney Peterson, a first-year, led the Leafs in kills with 16, while Natalie Hubby, a senior, recorded four blocks, and Danielle Plank, a sophomore, had 18 digs. The Cougars led the Leafs in terms of kills 56-42, and digs 76-69.

While the end result wasn’t ideal, Hubby had nothing but praise for the team.

“We had such great chemistry this year. Even though we had our ups and downs this season we really supported each other through everything. We worked together as a team rather than working on our personal goals or focusing on our personal statistics. So this connection worked well on the court just as it did off the court.  We trusted each other on the court and if someone made a mistake it was easy for us to shake it off because everyone was so supportive,” she said.

Goshen is set to return 12 of their 17 players next season and Hubby will miss being a part of the team.

“The friendships that I made this season were just amazing and priceless. I’ll really miss seeing these girls every day at practice and it will be sad to not be part of that gang next year. At the beginning of the season we were just getting to know everyone, but by the end of the season we developed strong friendships. I even became closer to girls that I already had relationships with from past seasons,” she said.

Hubby continued, “I’ll also really miss the competitive nature of the sport, because there aren’t really a lot of opportunities to play competitive volleyball outside of the college and high school levels. It’s weird to be done, and I’m not sure how I feel about it, I’m sure it will hit me soon.”