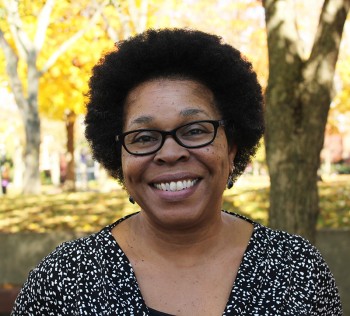 What does diversity mean to you?

I would say that diversity is a fact, like the world is diverse in a lot of ways. And for the work that I do, I usually say both outside and inside the classroom, that I do “anti-oppression work.” I used to call it diversity work, but it became such a buzz word and such a word that escaped the vision that I have become a little suspicious of it.

Sometimes I think the word means that we need to be more colorful, but we are not really changing the structure or the system. Just adding more colorful people and then we can say that we are diverse.

Why do you think the world needs diversity?

Having diversity means having multiple perspectives, which gives us more opinions.

There are different strengths that people bring to the table, putting culture and race aside. If everyone has the same strength, then you are lacking in the things that we need, but you may not know it. You may all agree on that one thing, but there is a piece about it that you may not know about. Diversity strengthens what we try to do together. It is just more interesting, and in an educational setting like Goshen College, we absolutely need it.

How do you think diversity affects GC?

It depends on what kind of diversity. I think that the campus is a better place the more diverse it is. So I’m definitely for it. Any institution will change if there is a dominant group, that is whether it is racial or religiously, when there are more people to counterbalance the dominance.

It raises questions. It’s a question that comes up, for instance, when our population of Mennonite students grows smaller—it changes things. It changes the way we talk about faith, it changes the game for us who teach, the way we think about who is in the room. There is greater good than bad in having diversity anywhere.

Where do you think we lack diversity at Goshen College?

We certainly don’t have many faculty of color. I think that it’s better if we had more diversity on the faculty. But I definitely know the reasons why that is. It’s not just because people said, “Yeah, we don’t want them.” It takes work, long-term work.

The other thing that I am more aware of now is that students are saying it to me. Students are recognizing that this is something that is important. It’s not just students of color saying that we need more faculty of color, it’s every student. There’s also a number of faculty who feel the same way, too. And it makes me happy to be able to know that there are people who are pushing for something that we all need, and that is diversity.

Why do you think it is hard for people of color to live in Goshen?

The first thing that comes to mind, especially for people who are coming from more diverse settings, is that it’s hard to be around mostly white people. I like seeing and being around people of color. I get tired of being the only, or one of a very few, person of color in a group—at work, at church, out socializing. I think it’s tiring because you always have that double consciousness that W.E.B du Bois talked about—the possibility of having to ‘explain’ yourself to people, being on guard about racist remarks, usually not intentional, but still and having to decide whether or not you are going to respond to it.

How do you think we can tackle the topic of diversity on campus?

First, we need to acknowledge the fact that we are not as diverse as we say we are. We also need to know that diversity is a long-term engagement and that it can’t happen overnight. It takes strategy and people who are willing to see things happen.

What about the history of Goshen makes it hard to attract more people of color?

This area has a racist past, and that memory lives on. It is very true that Goshen was once a sundown town and everyone knows that. We have to acknowledge it. Knowing how much black lives are under assault, it’s hard to feel safe. I find myself resenting the fact that I have to be extra, extra careful. And I worry about the safety of my children, and of my students.

How can people start to make a difference?

I think that it will be a challenge for us moving forward, just thinking that racial and ethnic diversity is certainly not the only one. And I think that we are learning how to do that better, but I’m hoping that we don’t end up nurturing a culture whereby people feel like they are not wanted here because they have different perspectives. And it’s a difficult thing to do.

How do you engage in genuine conversation without pushing or shaming people or even hiding or blurring their own beliefs? I think for those of us who teach, that’s a really important thing to get a handle on.

We need to hold the balance of living into the integrity of my own understandings and beliefs, but not using that to shame other people. I know that some of that is not in my control. But the least I could do is try and see what happens.