Rachel’s: Where ‘everything is good’ 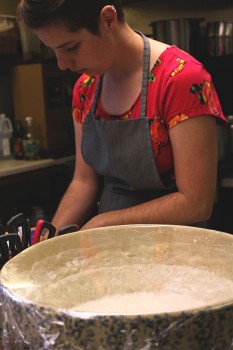 Rachel’s Bread opens at 8 o’clock on Saturday morning, but the line has formed long before. Customers wait to order pumpkin swoons, chocolate croissants, quiche and much more.

“When I was a student at Goshen College, my friends would always talk about how there was no place to hang out downtown,” said Rachel Shenk, who opened her bakery business 21 years ago. “So in retrospect, it’s interesting that I decided to do this.”

Since 1994, Rachel’s Bread has been a staple business in downtown Goshen. Originally born in Belgium, Shenk was never satisfied with the bread selection in the United States—including in Goshen.

“In Belgium they had really good bread, and when I came here the bread was just pitiful,” Shenk said.  “It made sense to me that I would make bread at least for myself and my family.”

After baking out of her home, she began selling bread in the Old Bag Factory in 1994, and she continued doing so for eight years. She moved to her current location at the Farmer’s Market in 2002, at the request of Dave Pottinger, the owner and developer of the market.

Though she spends her days surrounded by dough, flour and brick ovens, Shenk still takes pleasure in making and eating most everything at her store.

“I still enjoy making bread, even though I’m always around it,” she said. “I particularly enjoy the seasonal breads that are a little bit different. I also like making croissants.”

When asked to name her favorite item, she said, “Everything. Everything here is good.”

Stoltzfus added, “People have their preferences, but we pretty much always sell out of everything. Usually the frittatas, French toast and specialty breakfasts go first.”

Selling out is confirmation of the quality.

“It makes me feel good,” Shenk said.  “It doesn’t surprise me, though. We know what goes into it from start to finish, so we know what it’s worth, and people can taste that.”

Though she has been in business for more than two decades, Shenk said it doesn’t feel like a business.

“When I started I never thought that I was starting a business; I just knew that it was something that I was good at, so I planned to see where it led me,” she said. “Over the years, I often don’t think of it as a business. I think of it as just a little bit bigger than my house.”

“I would have said I would never go into business, because in my mind, especially in our culture, people go into business for pure profit earning,” she said. “My approach has always been ‘If I can live off of what I do, then I’ll do it.’ That may come from my European upbringing, where there are small Mom and Pop places spread all over town.”

On June 23 of this year, Shenk expanded her business by opening up The Wedge, a cheese shop, adjacent to Rachel’s Bread. Here, customers can order as much imported cheese as they want.

Customers who like not only the bread but also the “Rachel” in Rachel’s Bread may not like her rationale behind the expansion.

With she mentioned retirement, a visitor asked if there is anything that would stop her from continuing her businesses.

“What would stop me would be circumstance, or me choosing not to continue,” she said. “I don’t feel like my career is who I am. I know who I am, and that is in here,” she said, pointing to her heart.