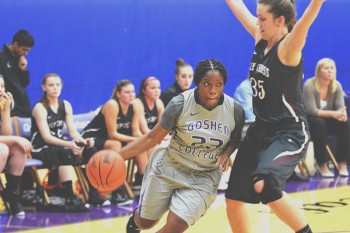 Lynnia Noel, a junior, dribbles around a Holy Cross defender as the Leafs go on to win 59-50.
Photo by Maria Bischoff.

After finishing last season with a positive record of 18-13, the Goshen women’s basketball team opened the new season with two home victories.

The Leafs defeated the visiting Saints of Aquinas College 74-54 Tuesday night in Goshen’s Gunden Gymnasium for their second win of the year. Against the Saints, Tyra Carver, a senior, led all scorers for Goshen with 20 points on 9-of-14 shooting with Lynnia Noel, a junior, adding 12 points and six assists for the Maple Leafs.

In the game against Aquinas, Tecca became the 13th GC women’s basketball player to score 1,000 career points. She started the game with 994 points and she reached 1,000 points with 2 minutes, 51 seconds left in the second quarter with a free throw.

The Leafs stymied Aquinas all game, forcing 21 turnovers and holding the Saints to 36 percent shooting from the floor. Aquinas was led offensively by Hannah Brefeld, who scored 12 points.

Before the game, Tecca talked about the intense preparation that the team had this preseason. “Preseason was an absolute grind, as we came in every day looking to get bigger, faster, and stronger,” she said. “We conditioned for weeks until we finally got to practice with a ball.”

Noel, another team veteran, also emphasized the preseason. “This preseason was very intense; we would have open gyms where it was less structure and days where we only conditioned and worked on skills,” she said.

According to Tecca, scrimmages they played before helped the team to improve. “We won our two scrimmages which really gave us a boost of confidence heading into regular season,” she said.

What Noel appreciates the most about the team is the chemistry. “Some days were tough, but I think since we all go through preseason as a unit we help each other through the not so easy days,” she said.

The new players are doing their part to keep the strong chemistry, according to Noel. “As far as the new players go, they have all come in and given us a spark and they fit right in with us on and off the court,” she said.

“They all provide great things to the team and I can’t wait to see where they take their game from here,” Tecca added. “They’re all quickly learning and adapting to our system.”

Tecca and Noel both spoke about the opening game against Holy Cross, a 59-50 victory. “The first game was as you’d expect a first game to be—messy. We dealt with what most teams do on opening night: nerves, excitement and mix-ups,” Tecca said.

“We were able to see things that need improvement, but are happy to see that we have the poise and maturity to win a not-so-pretty game,” she said.

Noel agreed with Tecca’s words and added, “We are working on the things we lacked in the first game to perfect them.”

For Noel, the goals for the team this year are “to be a defensive force and run teams in the ground.” She added, “We want to win games and potentially make an appearance to the NAIA National Tournament, too.”

The Maple Leafs play again on Friday when they host Trinity Christian at 4 p.m.