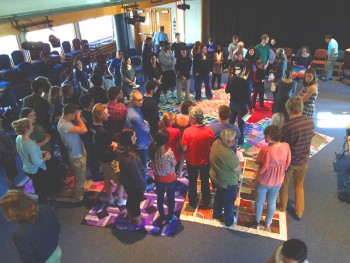 Students were asked to face history in an interactive simulation called “The Loss of Turtle Island” on Tuesday and Wednesday. The simulation was led by Karen Kauffman Wall and Erica Littlewolf, peace educators working with Mennonite Central Committee.

Students who participated in the simulation were given a card when they entered the room. The cards each had one of five pictures that tied into the activity. The participants were asked to stand on blankets laid out on the floor in the center of the room.

At first, only one blanket was removed. Then, participants holding a certain card all left, representing the Native Americans that died of diseases brought over by settlers. As history was told to the crowd, blankets were removed and separated out to show the effect of the laws and government on the amount of land the Native Americans had.

“I was a little shocked. It became very real, seeing the demonstration, seeing the people step off the mats and seeing how little space was left,” said Rachel Buckley, a first-year, after participating in the simulation.

A particularly surprising point for attendees was the mention of Mennonite participation in the cultural assimilation of Native Americans.

One participant said that he likes to view Mennonites as an idealistic group, but it’s important to recognize the reality that Mennonites are not perfect. They played a role in starting boarding schools for Native American children in states like Oklahoma and Kansas, with the goal of assimilating the children into American and Christian culture.

Participants were asked to reflect to the group after the simulation was over. One community member felt the experience was powerful because she had taught at a Navajo boarding school. Another participant said she felt numb, with no way to move forward from this.

“I think it was a very sobering experience,” said Christi Sessa, a first-year. “I didn’t quite realize the extent to which the US had been so bloody awful. The people actually had to argue that they were human. I still do think and hope that justice can be done which is why I did the exercise in the first place.”

Wall and Littlewolf concluded the simulation by saying that it was common to feel guilty, sad and paralyzed after this activity. While these are all valid feelings, the important part is to not stay in that place.

“Our hope is that this inspires you to learn more,” Littlewolf said. “Do some reading. Begin to examine things through a different lens.”