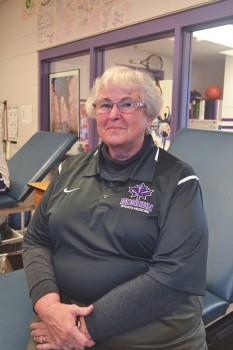 Linda Kaminskis, affectionately known as “K,” is retiring after 11 years at Goshen as the head athletic trainer.
Photo by Marissa Hochstetler.

Linda Kaminskis, the head athletic trainer at Goshen College, and a member of the Indiana Athletic Trainers Association Hall of Fame, will retire at the end of the 2016 spring sports season.

Kaminskis, also known as K, reflected on her time at Goshen.

“This is my 11th year at Goshen College, but  it only seems like two or three [years],” Kaminskis said. “It has gone by very quickly.”

Kaminskis, who has spent 34 years in the field of sports medicine and athletic training, ended up on the career path as if by chance.

“After college, I was coaching women’s basketball and track and field at Northridge High School,” she said, “and I’ve taught anatomy, physiology, physical education and health for about 33 years. It took me a while before I realized that the better part of my day started when I entered the athletic training room.”

Kaminskis’ frustration as a coach helped spark her interest in athletic training. “I would send injured players to a local physician and the physician would shut the player down for six to 12 weeks… and their season would be over,” she said. “I thought that there had to be another way.”

This thought eventually led Kaminskis to the realization that athletes weren’t receiving the best treatment possible. “I went to a conference on athletic training and met up with Marge Albohm, who had been president of the National Athletic Training Association, and she encouraged me to get involved, so I did.”

On her way to becoming a trainer, Kaminskis received guidance from Jim Routhier, known as JR, who is currently head volleyball coach at Goshen College but back then was Concord High School’s athletic trainer.

“We go way back,” said Routhier. “In order to become a certified athletic trainer, you have to have internship hours. So she did all of her internship with me at Concord High School.”

Kaminskis expressed her gratitude: “It is because of JR and Marge Albohm [that] I became an athletic trainer. I have them to thank.”

Kaminskis has come a long way since her time as an intern. She has a decorated list of achievements after working for over three decades in the field. In 2005, she was selected as Indiana Athletic Trainer of the Year in the high school division. In 2011, while working as a trainer at Goshen College, she was inducted into the Indiana Athletic Trainers Association Hall of Fame, which is an award extended to only one or two trainers a year.

Josh Gleason, GC’s athletic director, said, “As a member of our team, she is very supportive of everybody. K is probably the most caring person that I know. I think our athletes have a better understanding of that than anybody.”

“K has always been not only a great athletic trainer…but she is like a mother figure,” Tecca said. “If you are ever sick or you come to practice hungry or you’ve just had a really bad day, K is always there to get you snacks or talk to you or just listen.”

Katy Anspach, a senior volleyball player, learned  to know Kaminskis well through difficult times. “In the past two years I tore my ACL in both my knees and she helped me get with the doctor,” Anspach said. “She pushed me in physical therapy; she was there for the whole process… She really goes above and beyond.”

Through the sports practicum class, Kaminskis also helped students make career decisions. “In the past year and a half she [K] has really helped solidify me wanting to go get my master’s in athletic training,” said Aaron Frost, a senior education major.

Stephanie Miller, the head basketball coach and athletics assistant, said that Kaminskis does the impossible every day. “Her plate is more than full,” Miller said. “I mean, I have 15 kids to take care of and it seems like an unrealistic job. She has 255 [athletes] to take care of, and I can’t imagine the extra time and effort it must take for her to do that.”

Kaminskis is an athletic trainer by description, but takes on more than just that role. “She’s a counselor, she’s a professor, she’s a friend, and she’s a colleague,” Frost said. “She has at least 10 different hats that she wears at any given time.”

Because of her many “hats,” Routhier said, Kaminskis will be hard to replace. “After being a head athletic trainer for 30 years, I know what it takes to make a good program and she never shortchanges anyone or anything,” said Routhier.

“Goshen College is really going to miss her.  It’s going to be tough to find somebody to fill her shoes,” said Routhier.

Kaminskis plans to explore other hobbies during her retirement. “I could get involved with women’s issues or animal rights issues,” she said.  “I could also spend a lot of time in nature, taking walks, golf and spend some time with my husband.”

But most of all, she said, “I will miss my athletes. I will still be watching sports, trust me. But I won’t have to jump out of my chair and attend to them. I will be able to relax and enjoy the sport.”

Molly Zook, a junior biology major, put her farewell in personal terms: “K, thank you so much for all you’ve done and all the years of hard you work you’ve put in. I know you sacrifice a lot for us…Goshen won’t be the same without you.”