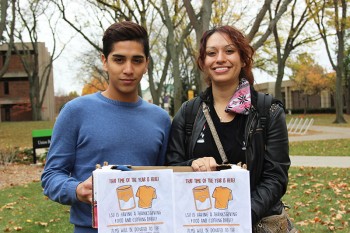 Along with the stress and heavy workload that follow fall break, members of Latino Student Union (LSU) as well as members of Goshen College Nursing Student Association (GCNSA) are organizing a food and clothing drive to help families in need throughout Elkhart County.

The food drive, which began on Monday, will run until Thanksgiving, whereas the clothing drive will run until the end of the semester. Donation boxes are located in almost every building on campus and all donations will be given to both the Salvation Army and the Elkhart County Women’s Shelter.

“Our goal is to help as many families as we can,” said Jose Mendoza, a senior and vice president of LSU helping to organize the event.

“We are hoping to collect at least one food or clothing item per student faculty for a goal of about 1,000 items. Preferably warm clothing.”

Alexa Valdez, another member of LSU, spoke with the two organizations and their need for more donations became abundantly clear. Last year, Mendoza and senior Rebecca Weaver started GC’s first ever food and clothing drive with donations going to the Window, “but this year, they already have a lot of donations coming their way,” said Mendoza. “We’re hoping for this to become an LSU tradition.”

Mendoza said he “felt that it was something that was really needed here on campus, and this year we’re trying to emphasize reaching out to the community.”

This year LSU is reshaping their mission by focusing more on community outreach. “This [food and clothing drive] is a great way for us to work on helping people in more than just Goshen,” said Jessica Davila, a senior and president of LSU who is also helping to organize this event.

Looking ahead, LSU is aiming to continue their community outreach in the spring. “We’re in the midst of planning a dance marathon,” said Davila, “which will hopefully happen in March.” This dance marathon will raise money that will be given directly back to the community on a larger scale.

Members of LSU will pick up donations from the boxes around campus once or twice each week. Those who are interested in helping out can ‘like’ LSU’s Facebook page or send an email to jdmendoza@goshen.edu.

“This [event] is not going to change the world,” said Davila. “But little things that people do will help at least a couple families. Little things can make a great impact.”