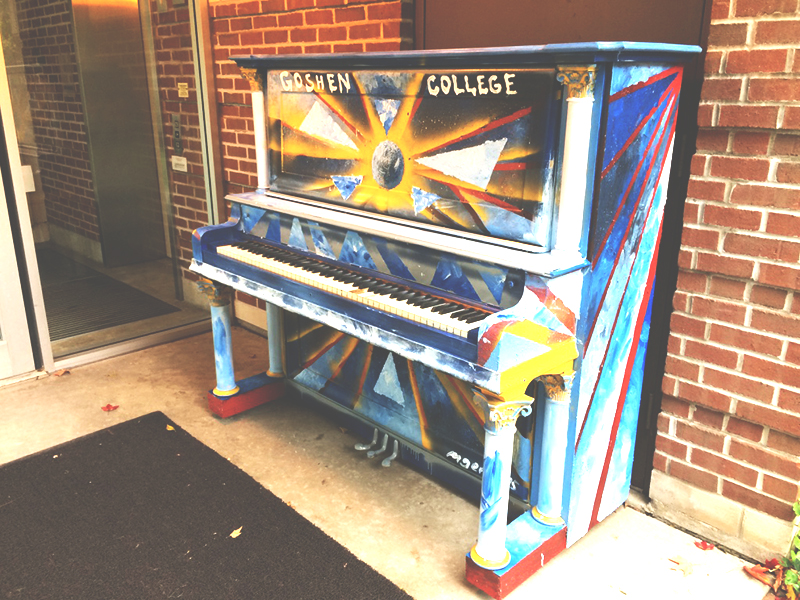 Goshen College students walking by the Administration building are in for a pleasant musical surprise.

Located in this nondescript corner of campus lies a new painted piano. If one decides to approach and further inspect the piano, they will be greeted by the evoking artistic stylings of Maddie Gerig, a third-year student at Goshen College. Riddled with chipped keys and left without a bench, the piano is painted with a color scheme of varying shades of blue and white accompanied by powerful accents of yellow and red.

This piano came as a result of the efforts of Student Senate to “spontaneously interject” some of Goshen’s abundant musical talent into our campus, said Ben Shelly, president of Student Senate.

When asked about how this project came to fruition, David Zehr, who used to serve on Student Senate, said, “Two years ago, Maddie Gerig and Elizabeth Derstine (who were both at-large representatives on Senate that year) had some suggestions related to doing artistic things around campus.”

Zehr went on to explain that this project was inspired by the Keys for the City program from Lancaster, Pennsylvania, a program which placed various painted pianos across the city.

With a little advice from the Keys for the City program, Beverly Lapp, professor of music, and Dennis Chupp of Chupp’s Piano Service, GC received its own piano.

Through Chupp’s business, a couple friends of GC “decided to donate their piano,” said Zehr. The newly donated piano is now in Java Junction and the old piano was given to Gerig to paint over the summer. With help from Phys Plant, the piano was moved from the garage to its current position outside the Administration building.

Now, the old 1930s era Java Junction piano brings joy to students and faculty alike who happen to stumble across it. Skye McKinnell, a first-year, has enjoyed the piano with her sister. They found the piano and proceeded to sing a duet of “Think of Me” from Phantom of the Opera. She described it as “a magical experience that made me feel like I was in a movie.”

Reactions along these lines have proved to be a common thread among GC students as many have described the piano as something that has improved their days.

Mary O’Connell, a first-year, said, “It brightens my day every time I pass it going to class.”