A few things to consider before you “Teach for America” 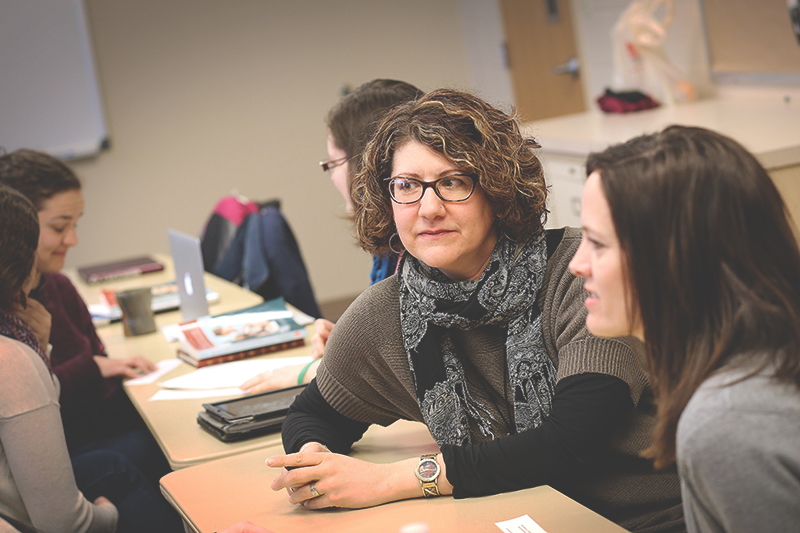 Suzanne Ehst, associate professor of education, engages with students during a course.
Photo contributed by Comm-Mar.

Every year, an impressive number of GC grads choose to spend their first years after college in some type of service. Among the organizations repeatedly chosen by GC students is Teach for America (TFA), a nonprofit that puts recent college graduates in some of the country’s most under-resourced schools. This selective program attracts driven, service-oriented college grads; screens them for traits like leadership, “grit,” and achievement; then, after just five to seven weeks of training (most TFA members didn’t complete an undergraduate teacher ed program), places these “corps members” in some of the country’s most demanding classrooms.

The organization professes to work toward educational equity and recruits undergrads who share these noble aims…but for college students considering TFA, it is imperative to consider the ways in which the organization negates the very goals it claims to advance.

To be clear, this piece is not a critique of individuals who have chosen to serve with TFA, nor is it a critique of those who might still choose this path. Rather, it is an attempt to make sure the justice narrative that the organization tells about itself is balanced with the voices of critique—many of which come from former TFA participants.

A repeated criticism is that TFA contributes to the “revolving door” of teachers in the country’s neediest schools. Key to improving underperforming schools is a stable, community-embedded teaching force; however, 80% of TFA’s teachers leave the profession after just three years, and many leave (disillusioned) before their two-year term is over. Additionally, in their first two years, TFA’s teachers perform slightly less well than their traditionally credentialed peers; with experience, all beginning teachers greatly improve in performance, but most corps members leave their schools at about the time they’re really developing the capacity to effectively teach their students.  Thus the very goal of serving low-income students is negated by the organization’s structure.

In some cities, long-time, local teachers have been systematically replaced by temporary TFA corps members. An extended study of New Orleans revealed the way that Teach for America worked with for-profit charter schools to essentially replace a portion of the public school system. After Hurricane Katrina, about 4,000 local teachers were laid off, and multiple public schools shut down. In the rebuilding efforts, the city created a charter school district, largely staffed by teachers from outside the city who were credentialed through alternative means. TFA quadrupled the number of recruits that it sent to New Orleans.

Certainly, some of the career teachers were ineffective; however, one collective effect of the layoffs was that a local, experienced, majority black, unionized teaching force was replaced by a transplanted, inexperienced, majority white, non-unionized teaching force. In the wake of this change, both parents and students voiced concerns about things like rigid disciplinary strategies, cultural misunderstandings, and a loss of teachers with a long-term commitment to the community.

Again, my intent is not to criticize those who participate with the organization. In fact, many of the critiques come from former TFA members who felt misled by the organization’s social-justice rhetoric and unsupported in their attempts to effect the kind of change they were told they would achieve. Two recent books compile first-person accounts from alum who describe the adverse effects of their teaching on both their students and themselves.

In these books, former participants describe circumstances similar to that of New Orleans: TFA corps members are often placed in schools that are significantly culturally different from their own backgrounds. In their brief training, they receive few tools to help them understand the complex social and cultural dynamics of their classrooms. Rather, in five to seven weeks, they are given mechanistic behavior management techniques, inspirational messages about “making a difference,” and one-size-fits-all instructional strategies.

Multiple alum claim that they were expected to teach toward standardized tests with a tightly scripted curriculum, and there was little room to question how school might be more engaging or culturally responsive. Additionally, corps members repeatedly mention a lack of effective support, using words like “isolating” and “disillusioning” to describe their experience in the program.    Stories like this are not universal, but there are enough of them to raise questions about the gap between the organization’s mission and its actual impact on schools, students, and its own members.

Finally, we need to weigh the organization’s impact on the education profession as a whole. We’re in an era when an overwhelming number of career teachers feel that their professional knowledge is devalued and we see a decline in the number of people pursuing education as a career. Organizations that frame teaching as a quickly acquired skill-set further contribute to the profession’s lack of prestige. I’m biased by my position in the education department, yes, but research repeatedly affirms the importance of extended practice under a mentor teacher, critical reflection on that practice, and theoretical study to inform classroom practice—all things that position the teacher as a critical decision-maker with specialized knowledge.

Granted, we do have a problem with a shortage of teachers in high-poverty districts. Teach for America does help to fill those gaps with individuals who have more training than a typical sub. However, such fast-track programs are not a long-term fix, and end up perpetuating the unequal system that created these shortages in the first place. Programs that do a better job of filling teaching vacancies are often embedded in a particular community (e.g. Chicago Teacher Residency), partner with universities to provide comprehensive coursework (e.g. Indiana’s Transition to Teaching, offered at Goshen College), and give ample time under the mentorship of an experienced teacher (e.g. Woodrow Wilson Teaching Fellows).

For those who feel called to teach in some of the nation’s most challenging schools, I wholeheartedly affirm that calling. It is noble. You are indeed needed. But please consider getting the training you need to have the impact that you desire.