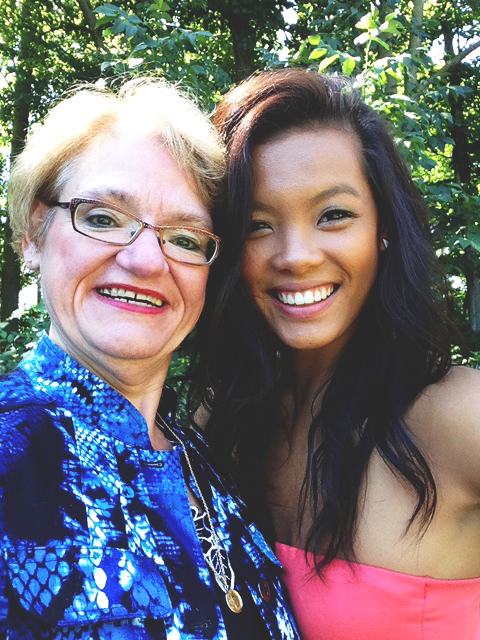 I know that you’re very busy—tell me about an average day in your life.

I’m at the high school sometimes as early as 6:30 a.m. Part of my role there is I have 30 teachers that I work with in their classrooms and do observations, and I also teach two classes. I’m generally over here [at the college] for a couple of hours most evenings—but not all of them. That’s the beauty of it for me; there’s kind of this ebb and flow. No two days look alike. Typically, my days are over somewhere between 8 or 9 o’clock in the evening. Now, that’s not to say that sometime in there I haven’t stopped and relieved my poor dog.

So this semester you are filling in for Deb Brubaker with the Women’s Choir while she’s on sabbatical. What made you decide to take on another responsibility?

One of the things that is difficult for me in the role I’ve been in the last couple of years is that I really haven’t had much opportunity to get to know students. I’m here in a part of the day when they’re practicing, and I’m certainly not going to run up to their practice rooms, sit down and say “Hey, you look interesting!” I think the biggest gift that this place has is how we experience music together. And so I wanted to take the opportunity at least to have some moments to experience music with the women who I’ve loved listening to. I’m just very moved by that.

So it’s worth it?

It’s worth it. Yeah, it’s so very worth it. At the end of our days, when we have opportunities to do things that feed our souls, that’s a good thing.

In our rehearsal the other day you talked a little bit about your daughter. Can you tell me the story about how you met her?

In the year that I adopted my daughter, there had been 150,000 baby girls abandoned in China, and I just began to feel more and more that I was being pulled to China. In June of that year I got a picture of her as an infant in the mail and word that everything had gone through and that Madeline, my daughter… was my daughter. It was a miraculous process—almost 9 months to the day, which was abnormally short. On the morning of September 11 my daughter was handed to me. I remember that kind of surreal feeling of looking down and seeing her, and that first dawning that this was truly my daughter. It was a God-given moment.

One of the things that I find striking about this story is that it was nine months from when you got the call to when you held Madeline for the first time. That’s an incredible coincidence, if that’s what you want to call it.

I choose not to think of it as a coincidence. The journey for me was prayerful, and I said, “I’m going to start walking through doors as they open.” And that’s the way I’ve lived my life. I remember sitting in my backyard about two months into this journey and thinking “What am I doing?” I say, “God, if I’m supposed to keep moving forward with this, I need a shooting star tonight.” My daughter has this book called “Shooting Stars” because as I sat there, I didn’t see one shooting star—I saw two cross each other. There were times like that. There were silly times too, when I would ask for silly signs. I was travelling to Fort Wayne and I said “Okay, God, I need something this morning to give me the courage to keep moving forward. I need to see a deer.” And I looked off to the side of the road, and here in this person’s front yard was some dumb deer statue. It made me laugh out loud. But I remember that story, so it must have had a place in there someplace. I think that was probably the last time I asked for a sign.

But it helped you find the sense of humor in it all?

That’s right. It kind of put me in my place.

You told us in class that Madeline had bells on her wrists and ankles in the photo you received of her because she loved the sound they made. Does she love music as much as she did when she was a baby?

She does. She’s not studying music, but she sang all through high school, did some leads in musicals, and played cello and piano. She had an affinity for it—she has a wonderful ear. Everyone always assumed she’d go into music, but I guess I probably am guilty of not pushing in that direction. I think the other thing she saw is, even though she loves it, she wasn’t quite sure she had the passion. If you’re going to study it, it’s something you need to have passion for.

That’s something good to know beforehand.

Exactly. So I always urged her to find something that she could be passionate about. She’s passionate about people, so she’s working in public relations. And, actually, she’s very passionate about fashion. That’s been a hard one for me—that’s not my passion. I’ve had to recognize that our passions are all very different. The glory is that we have them.

How has it been adjusting to having her away at college?

When that last child leaves home—and for me, my first was my last—a whole area of your life has changed. And I anticipated that. But what I didn’t anticipate is how differently I’d feel about being at Goshen High School. Because even when Madeline was little, she was right at school with me. It felt really vacant there without her. That was an adjustment that I didn’t see coming. But, it’s all good. We find our stride in life and we find joy in what they’re doing, and look forward to the times that they can come home. I’ll always be her mother and she’ll always be my daughter, but it’s fun to watch the relationship connect in another dimension as well.

My parents always tell my sister and me that they raised us to go do other things.

That’s right. And I would be very disappointed if Madeline had decided that she wasn’t going to do other things. And it’s exciting. It’s just exciting. She’s an incredibly independent person, and so it’s nice to watch her begin to fly. It’s a wonderful time.