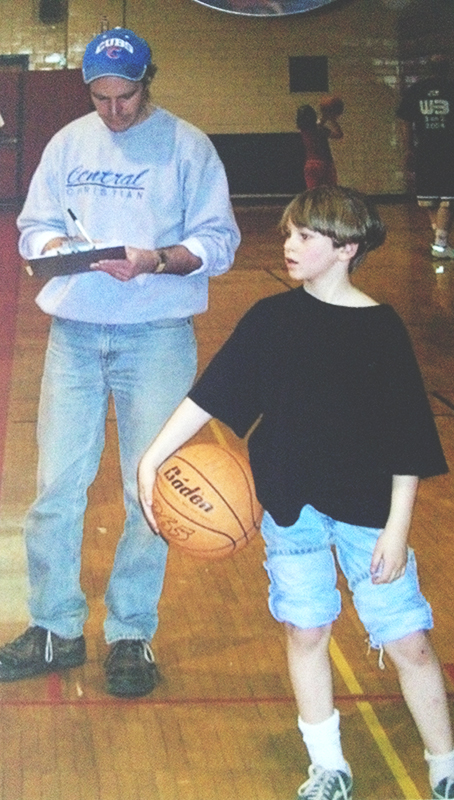 A 9-year-old Seth Wesman is frozen with fear by a girl looking at him and his stylish outfit.
Photo contributed by Seth Wesman.

Before I begin, I would like to preface this with a cliché by saying I’m not funny.

Well, not intentionally funny. This is a point that was made brutally clear to me by my sixth grade principle who said “I don’t think we share the same sense of humor.” He was referring to me crawling into the cubby under my locker in an attempt to take a quick nap before school—which earned me lunch detention.

In my defense, that wasn’t an attempt to be funny; but the point had been made that humor was not my strength (personally I still think it’s impressive that I fit in there). When approached to write this article my response was “I’m not funny. The only time people laugh at me is when I do something stupid.” So I decided to give the people what they want.

I’m that guy who will say something completely stupid and then say something even more ridiculous 10 seconds later while trying to defend myself. As far back as I can remember, I have delighted people with my ability to make myself look like a fool. From my early days as a budding young intellectual who didn’t realize my kindergarten class only went until noon, leading me to miss the bus ride home on my first day, to later in fourth grade slipping on a wet floor and taking out three desks in the process of falling, I’ve always been able to give others a good chuckle at my own expense.

And the adorable blunders didn’t stop as I got older. On a class trip my junior year of high school I was talking to a girl and about halfway through the conversation I actually realized what was going on; she was basically asking me to ask her out. Naturally I handled the situation smoothly and everyone walked away with their dignity…not. I made some pathetically obvious attempt to change the topic of conversation which led to a frosty 5-minute talk about the weather.

But, making a fool out of myself hasn’t been limited just to classroom or human interaction settings, as I’ve made my share of blunders in the athletic arena as well. Honestly, SportsCenter could have done numerous Not Top 10 lists with footage of me. God made it clear that I wasn’t meant to be a soccer player the day that I was both clotheslined by the ref and then knocked out of the game with a concussion when I blasted into the goal post while playing defense. And one can hardly begin to fathom the amount of laughter that comes out of your opponent when you flip over the net during a tennis match.

You might read this and think “Wow this guy is a lost cause” or “I pity this poor sap,” but please don’t. When you’re this accident-prone you learn to laugh at yourself, as I’ve been doing continuously as I write this and reminisce about some of my best/worst moments. In my opinion, one of the best qualities you can have is the ability to laugh at yourself. So if you also suffer from being accident-prone, rest assured you are not alone. Remember the words of Dr. Tobias Fünke: “There are dozens of us…DOZENS!”

*For those of you who actually read all of this I have a reward for a few of you. One of the examples I gave of my delightful clumsiness is actually not true and if you can tell me which one it is I will give you a prize (this only applies to the first 5 or so people who answer correctly).