Earlier this month, one student at Savannah State University and at Sacramento State College were shot to death on their respective campuses. Closer to Goshen, a Purdue University student was shot and killed on campus last year.

Goshen College’s crisis management team is updating the college’s plan to make sure students know what to do in an emergency situation, be it a gunman on campus, a tornado or another type of emergency.

The college’s crisis management plan is nearly a decade old, a document of several pages inside a thick, white binder that sits on the desk of Brian Guetig, the director of campus safety and security. The policy revisions should be completed by October or November, he said.

“Any document about policies or procedures is not going to be the most valid after a long time,” he said. “It’s time to update the policy and get the word out.”

Several students acknowledged that they don’t know what would happen—or should happen—if there was an emergency on campus. For instance, Elizabeth Franks-North, a senior and former resident assistant, said information has never been given to her, and she doesn’t know how she and others would react in an emergency situation.

“Honestly, I didn’t even know we had a plan for if there was an active shooter on campus,” she said. “I assumed we did, because we are a responsible institution, but I’d never heard about it. I don’t even remember hearing about it when I was an RA.”

The crisis team plans to create folders of information to distribute to the campus community to pick up in all buildings on campus. Information in the folder would address a range of situations, including where to go in the event of a tornado and how to respond to the sound of gunshots on campus. According to Guetig, students currently don’t have access to this potentially life-saving information.

“We plan to have copies in folders in buildings around campus for students and faculty to pick up and read,” he said. “We want to make this available to everyone.”

The crisis team also has other plans to spread the word about the updated plan. In the spring, arrangements are being made to host a Safety Awareness Day and a special convocation about the new policy. Plans are also in the works to have safety videos posted on Moodle for convenient access.

“We want to promote the culture of safety and security on campus, having each individual on campus being part of the process,” said Guetig.

In revising the plan, the crisis team is also involving local law enforcement, like the Goshen and Elkhart County police departments. If there was an emergency on campus, there are other departments that would get involved as well, such as the Indiana Department of Homeland Security.

Guetig said the college has an emergency arrangement in place with the Goshen Police Department. To make sure that officers are familiar with the campus, they are given maps of the grounds as well as floor plans of buildings, dorms and apartments.

“From start to finish, an active shooter situation statistically lasts about three minutes,” he said. “Our goal is to compress that timeline so there is less collateral damage.”

The current plan in place outlines several off-campus locations for students and staff to go to in case of an emergency situation. Most of the locations are local Mennonite churches, made through contacts at the college. However, some churches are unaware their buildings would be used in case of a Goshen College emergency, something Guetig said will change in the new policy. If there was a problem on campus, there is a ripple effect that could impact area schools, businesses and the hospital.

“If there was a situation here on campus, other places around, like from businesses downtown to the hospital across the street have plans in place in response to something that happens here,” said Guetig.

Members of the crisis team include, in addition to Guetig, President Jim Brenneman; Jim Caskey, the vice president of institutional advancement; Provost Kenneth Newbold; and Launa Leftwich, the dean of students.

With the majority of campus shootings occurring hundreds of miles away from Goshen, Guetig said, it might be easy to think it could never happen here.

“We tend to think Goshen College is in a bubble,” he said. “We think nothing could really happen to us, when it could. We need to be as prepared as possible.” 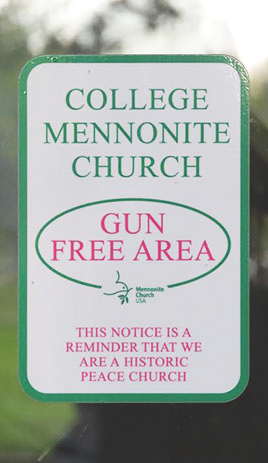