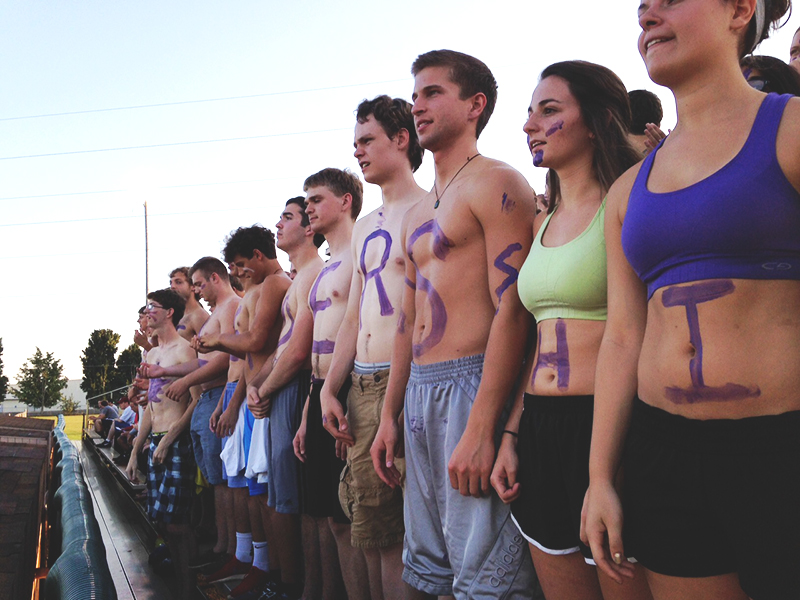 The true reason that many people attended the Saturday night match, however, was CAC’s annual face painting night, an event that showcases our school pride, artistic abilities, and far too many shirtless people in the front row of the student section. As a person who fits the description of your traditional chest-paintee (namely, “underclassperson who arrives early to the games, thinks they’re clever, and enjoys yelling loudly at opposing players named ‘Matti’”), I was one of the lucky few (18 to be exact) students standing in the front row shamelessly showing off my very untanned torso.

As it turns out, standing in the front row of the bleachers is a great recipe for accidentally elbowing passers-by in the face and kicking small children who are walking by.

Despite these glaring drawbacks, I found the experience as a whole to be deeply rewarding, and the evening truly transcendent. From the sheer joy of hearing disjointed chants wafting over my head, to the hilarity of third year hymn club leader Andrew Pauls directing “606” shirtless, yet wearing suspenders, to rearranging the letters in “Servant Leadership” to form fun new words (Rehardens, Philanderers, Leviathan, and Ravished are all possibilities), I was able to bask in the wonder of a beautiful late summer night in Goshen, and the lovely spirit that our student section demonstrated, even in the wake of two consecutive Maple Leaf defeats at the hands of nationally ranked squads.

Whether we were trying to decide if we should refer to senior goalkeeper Dean Nafziger as a “machine,” “guillotine,” “trampoline,” “listerine,” or “pinto bean,” or debating whether the 5core Media staff doing a Rockette-esque kickline was the best thing we’d seen all weekend, that night of soccer was an experience that surely drew the student body together, in the sense that everyone left the stadium with some of their neighbor’s arm/body paint. Thank you, CAC, for allowing us to stain all the shower stalls on campus a vibrant purple color, and get super hoarse before a night of trying to hear conversations in an inexorably loud bowling alley. Go, Goshen, Go!