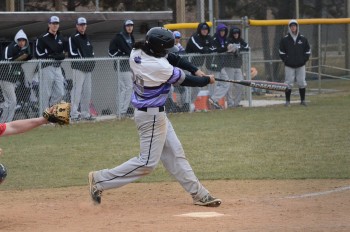 Cody McCoy, a first-year takes a swing at bat.

As the semester, and year, is finally beginning to wind down, so is the Intramural Sports season. Looking back, Director of Resident Life and Head of Intramurals Chad Coleman was quite happy with the year’s results thus far.

“I’ve had to do some things differently this year due to some leagues not being large enough for full seasons or unbalance between A & B Leagues,” he explained. Coleman talked about his new structure for tournament play. Instead of having all teams participate in the tournament, only the top four will compete for the championship title. “Only having the top four teams play in the tournament allowed for more regular season games to be scheduled, rewarded the best teams with the highest participation and skill, reduced forfeits in the regular season, [and reduced the amount of] lopsided first round games,” Coleman said.

Students will be able to look forward to competitions in Ultimate Frisbee, sand volleyball, and wiffle ball this May Term. Volleyball and Ultimate play will begin April 29, the first day after May Term classes begin, according to Coleman.

“Ultimate Frisbee is played on the KMY Courtyard in the late afternoons 3 p.m. to 5:30 p.m. while sand volleyball is played 6 p.m. to 8:30 p.m. Monday-Friday on the sand volleyball courts.” A second annual one-day wiffle ball tournament will be held on May 14 in left field of Goshen’s baseball complex.

“It was a big hit last year so I am bringing it back,” Coleman said. He also stated that the wiffle ball rules may be slightly adjusted this year to make it easier for teams to score.

Applications to sign up for all three Intramural sports are currently available online at http://www.goshen.edu/intramurals. The deadline to enter the Ultimate and volleyball leagues is April 23, and the deadline for the wiffle ball tournament is May 11.