Leafs take a game from IWU

Goshen’s softball team traveled to Indiana Wesleyan on Tuesday looking to steal a win or two from the 18th ranked Wildcats. Goshen struck first in the double header, taking a 4-3 win in 10 innings before falling 9-1 in the second game.

Goshen and IWU scored a pair of runs apiece through the first 7 innings before a misplayed ball in the top of the 10th allowed sophomore Krista Sutliff to reach base safely and first-year Brooke Maes and sophomore Miranda Robles to score, giving Goshen a 4-2 lead. IWU would strike for a run in the bottom half of the inning before Maes would shut the door on the mound.

In the second game, the Wildcats regrouped and took to the attack, pouncing on Goshen’s pitching early and often. By the end of the 3rd inning, Indiana Wesleyan had a commanding 8-0 lead, punctuated by a 4 run 2nd inning. Robles would score in the top of the 4th on another error, but that was as close as the Leafs would come to catching the Wildcats. IWU would tack on another run in the bottom of the 4th to win 9-1 in 5 innings. Goshen was only able to record 4 hits off IWU’s pitching in game 2, after tagging IWU for 11 hits in the first game.

After Tuesday, Goshen’s record stands at 3-33 on the year. The Maple Leafs look to grab a pair of conference victories when they host Spring Arbor for a pair of games on Friday, Game 1 of the double header is slated to begin at 3:00 p.m. 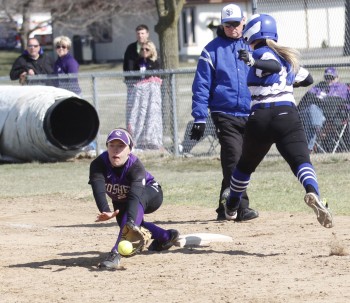 Abby Flickner, a junior, stretches for an incoming throw during their match against St. Francis this past weekend.