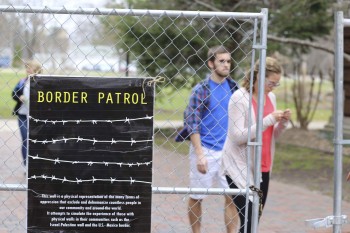 As if to mark the beginning of the Easter holidays, Goshen College campus was fenced off, with the mysterious words “Coming Soon on Monday” painted on a small cardboard poster. The fences were strategically placed across two sidewalks, between the Science and the Administration buildings as well as the Kauffman and the Science buildings. Gates wide open, the fence held no significance as people biked, walked and jogged through to the other side.

Finally, the long awaited Monday arrived. On the evening of April 6, 2015, the fence gates were closed off with two students patrolling either side. Large posters decorated the fences with the bold statement “Border Patrol.”

Below the title, the description read: “This wall is a physical representation of forms of oppression that exclude and dehumanize countless people in our community and around the world.” The fence symbolized more than just a physical barrier on Goshen College campus, but also served as a simulation for the Israel-Palestine wall and the U.S.-Mexico border. Social Reform Club, who initiated and established this “mock wall,” challenged the campus community with the question, “What are the social and physical barriers on our campus?”

Anya Kreider, a leader of the Social Reform Club, wanted the wall to address a variety of issues and appeal to a wider group of people. “The group decided collectively that we wanted to have a demonstration addressing barriers/borders around the world,” said Kreider. José Mendoza, a junior, participated in the mock wall by acting as a border patrol guard, asking students for their ID cards or refusing to let people pass. Mendoza stated that he was first hesitant about his participation as there are some people on campus who have directly experienced such discrimination. However, he also realized that his participation would “bring awareness to division that impacts the lives of many people who experience it. The goal was to give students an idea of what goes on at a heavily patrolled ‘check point’.”

Alma Rosa Carillo Flores, a sophomore and leader of Social Reform Club, also participated as a patrol guard. For Flores, the wall was a testament to the Mexican border. “People die, families and children risk their lives to come to this country,” said Flores. She was also curious to see how people who react to the mock wall. “I got two ends of the spectrum, people who felt insulted or annoyed, and those who thought this was a great idea.”

Uncomfortable and annoyed as people might have felt, this is the reality for many people around the world. Whether it be physical barriers or psychological ones, barriers separate communities, families, and individuals—it is a privilege to set up a “mock” wall and though we can only understand a small percentage of the true experience of crossing a border or facing a wall, it is still necessary. The mock wall, a short and brief simulation, challenged the Goshen College community to rethink their comfortable positions and privilege while pushing individuals to analyze the walls being set up and reinforced within private and public spheres on a local to a national level.