From summer camp to resident director 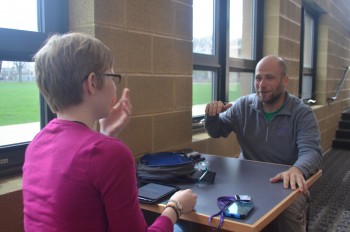 He arrives to meetings early, answers emails, looks for ways to address different issues in the Kratz and Yoder dorms and has to somehow balance the complicated puzzle that is created when a whole community lives together, most of them right out of high school. Fire drills, dealing with misconduct and social interactions with students are Friesen’s bread and butter. Despite being such an important part of the lives of GC students that people seem to assume he sprang full-grown into Java Junction at the beginning of time, Friesen spent many years acquiring the credentials to qualify for the job. In fact, it could be argued that his preparation started in the third grade, when Friesen first attended Swan Lake Christian Camp in South Dakota.

He continued to attend SLCC as he grew up, and the summer of his sophomore year of high school, at the age of 16, Friesen began work at SLCC. He continued to do so for eight more years, from 2000 to 2008, as he started college at Kansas State University and became an RA his third year, before transferring to Goshen College and graduating two years later with a degree in Bible and religion. He is willing to tell stories about his time at the camp, and laughs about a time when, as he and a co-counselor were leading a group of fifth-graders to a storm shelter during a tornado warning in the dead of night, he slipped all the way down a muddy hill in his boxer shorts.

Unlike most people, Friesen’s work and home life are inextricably tied together, and the flexibility of his schedule (while it has many benefits) means that he needs to be ready to step up at all times. The job of RD demands many things of the person including willingness to listen as well as to take action, awareness of what happens on campus, and the ability to make time for oneself and not burn out. Friesen expanded on these skills in his work at KSU, where he was the RA for a coed floor of 70 students, and through his work as an RD at Hesston College from 2007 to 2010, but his experience with third- through- twelfth-grade campers marked the beginning of what he considers to be “a form of teaching.”

Friesen seems to have found connections everywhere he goes—Ellen Conrad, second-year, was a former camper at SLCC, and he credits Bob Yoder, campus pastor, with first telling him about the job opening at Hesston. At one point, he even stayed with current first-year Erin Bergen’s family while taking a few classes at AMBS. After a solo bike trip across the lower 48 U.S. states in 2010, during which he covered over 10,000 miles, Friesen decided to pursue a career in academia and went to Wesley Theological Seminary in D.C. From there, not entirely sure what path to take, he decided to return to Goshen College—an opening came up, and the rest is history.

When asked what he most appreciates about working at Goshen College, Friesen answers, “the students are passionate and aware. They know what’s happening.” He also says that, as a part of the administration, he is affected by student attitudes and their ways of expressing that passion, and he hopes that students who care deeply about a cause stay resilient and determined, not angry, as he and the rest of the administration  goes through the process of addressing changes. With all this, the structure of the school year with its many breaks is something he uses to recharge; the owner of several bicycles, he takes advantage of the free time to cycle.

He says that one of the things he most enjoys is seeing the “lightbulb moment” that happens when students take something they have learned in a class and suddenly find that they can apply it to their own lives and campus. An official career in academia may not yet be a reality in Friesen’s life, but he says that he considers his work—from a South Dakota summer camp to jobs at three different colleges—and the way he addresses those “lightbulb moments” on campus to be his way of teaching.