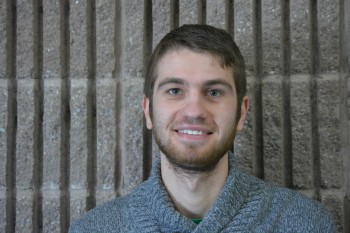 In December, I submitted a portion of my senior writing practicum (which was published as a Pinchpenny book this past Tuesday!) to the National Mennonite/s Writing Conference, just to see how it would go. To my surprise, it was accepted, and I had a perfectly good reason to fly to Fresno, California and present my work to the Mennonite writing community.

Of course, as a poor college student at a Mennonite institution should, I wanted to make sure my $500 travel stipend would cover absolutely everything going into this trip. So, instead of flying into Fresno’s airport and staying at a hotel, I flew on a discount flight to Oakland, California ($220 round trip) and took a $20 train to Fresno from there. Granted, to do this I had to spend two nights in an airplane terminal, but there were at least five or six of us sleeping on the long benches those nights, and it felt pretty homey.

While there, I stayed with an English grad student at Fresno Pacific University for free, which gave me tons of money left over for food costs. My host, Noe, was also a valuable asset in learning the ropes of California, helping to edit my final presentation, playing Diablo III and getting into Renaissance festivals.

California was beautiful, and FPU’s campus was gorgeous, with little nooks for studying just littered throughout the campus behind groups of bushes or under grape vines. But the true highlight of the trip, as you might expect, was the conference itself.

As soon as I got into my first conversation with other presenters, I realized how far out of my league this conference was. I was the only undergraduate presenter out of the 73 total. Most people were presenting a sequel to an already published book or a grad school dissertation, or work they were doing for a PH.D. One of the people on my presenting panel was Sofia Samatar, author of the award-winning book “The White Mosque.” And then there was me, presenting on work that would soon be made into a chapbook by my college press. I felt honored.

Every session, there were three or four choices for which panel to visit. Sadly, I couldn’t make it to the groundbreaking session on Mennonite LGBTQ fiction, since it occurred at the same time as my own panel, but I did later get to hear a presentation from one of the speakers entitled “Sweat and ‘Sinful’ Longing: On Trying to Write my Gay, Gluten-Poisoned, Mixed Up Mennonite Body.” One of the other most interesting panels was “Feminist Interpretations,” which was just at a high enough level for me to keep up with and still be extremely impressed by.

Later, I would be lucky enough to be present for a rousing conversation between six feminist women in their 30s to 60s, during which they talked about underground feminist networks that existed in the older Mennonite churches, perspectives on John Howard Yoder, pulling together a team to compile the last few decades of feminist Mennonite theology and republish it, and many more ambitious and exciting topics that I could barely keep up with, let alone participate in. Nonetheless, I was blown away by the drive and experience that each of the women had, and their commitment to continue engaging in their communities. It was a deeply moving scene for me.

On the last day of the conference, my panel arrived, and I gave my 13-minute reading, which ended in stunned silence. I then received a loud applause, and each of the other presenters commented on how powerful my stories were, even told incomplete as they were in that short time. I was beside myself with joy. I got advice from many of the more experienced writers there on how to improve my work further, and encouragement to keep writing and keep sharing my stories with others.

So, here’s one more.