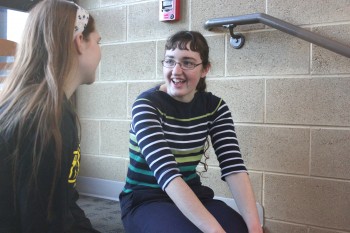 On Friday March 27, the first meeting of the C.O.F.F.E.E Club was held in the first floor connector. The acronym stands for Coffee On Fridays For Engaging Everyone. Club founders Luis Perez Lerchundi and Philip Longenecker arrived early and sat at a table by one of the middle windows as they waited for interested students to arrive. The table was covered with Java Junction’s signature stainless steel dispensers full of coffee, hot chocolate and water for tea, as well as a sheet of paper bearing the logo “Sign in, Cuties.”

The newly-founded club, one of the newest on campus, had been well-advertised through posters, word of mouth and paper slips placed on tables in the dining hall, and the students who walked into the connector seemed to be informed of the event and ready to enjoy the promised free beverages and the opportunity to socialize. 45 people signed in, but the club’s founders estimate that approximately 60 were present, and they hope to draw more students in through advertising and word-of-mouth. While Longenecker was expecting a much lower attendance rate, Perez says that he was optimistic from the start.

Perez, a third-year journalism major, was particularly interested in making sure the club was an accessible and open space for students who may not always feel engaged with the rest of the student body, with a special focus on international students. Both he and Longenecker wanted to have a place where athletes, commuter students and others who find it more difficult to find time to socialize, could do so in a loosely structured way without making a large time commitment.

With “short” being the key word, the first meeting lasted from 7:00 to 7:30 p.m. After signing in, students were asked to take a number from a sack and find the person whose number matched it; the original plan was for each pair to speak to one another for fifteen minutes and then rotate to another person. However, due to the high attendance, the process soon broke down, with dozens of interested students looking about the connector for a partner and waving their printed numbers in the air.

Soon, though, student leadership came to the rescue, and those present, carrying mugs and cups full of coffee and tea, teamed up with another person on their own, and either sat or stood as they talked and asked questions. There was a printed list of questions and conversation starters available, but for the most part, students chose to do without them. It was a time of fellowship and learning, and participants came away feeling that they had gotten a chance to start new friendships with people they may not have spoken to without the opportunity given them by the C.O.F.F.E.E. Club. Even when students are already acquainted, getting a chance to talk about hopes, plans and personal stories can hold a strong appeal.

Perez said, “people can meet other people who are similar to them, or can discover new things, new cultures.”

They first talked of forming a club on a Saturday, at the International Student Coffeehouse, and by next Tuesday the Student Senate had accepted their proposal and provided them with the funding they needed for Java Junction to cater the meetings.

Longenecker, a second-year biochemistry major, says that one of the reasons he co-founded C.O.F.F.E.E. is that, with all the duties of college life “it takes a really intentional effort to get out and sit down with people,” and he hopes that, through the club, students will get a chance to meet new people without making too much of an effort—a half-hour on a Friday night, the co-founders agree, is easily spared. They do not plan to keep an attendance record, however, and plan to make sure that there is plenty of room for fun and laughter.

As to why he thinks that the opportunity to meet people is necessary, even with Goshen’s small campus, Longenecker says that, “we sit in our little groups and there isn’t really a forward, intentional space where people go out and mix.”

He and Perez have high hopes for the club and the potential it has to give students (and eventually professors and staff members) a chance to get to know one another. While, due to the Easter break, there will be no club meeting on Friday April 3, students can look forward to the opportunity to meet other interesting people on Fridays for the rest of the school year.

Different variations on the fifteen-minute talk will be used to keep the club interesting, but the student body appeared invested, and many say they plan to come again.