Perspectives of a prof’s kid living on campus 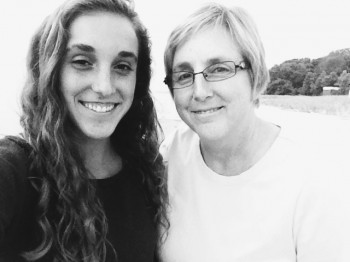 Maddie Birky, a sophomore stands with her mother, Beth Martin Birky, who is a professor of English and Women’s studies at Goshen College.

I was born and raised in Goshen as the daughter of two Goshen College graduates. My mother, Beth Martin Birky, has been an English and women’s and gender studies professor at GC for 21 years, and my father, David Birky, has been an adjunct microeconomics and macroeconomics professor also at GC. To top it all off, I’m also the granddaughter of former GC English professor, Wilbur Birky.

During my early high school years, rather than embracing the maple leaf within, I insisted on fighting tradition. Determined to break the familial pattern and do the opposite of what my parents expected me to do, I refused to say I was even looking at GC. When people at my church or at school asked me about college, instead of hearing the normal question of, “What schools are you looking at?” I was asked, “So have you applied to Goshen yet?” The amount of assuming that went on throughout my junior year was enough to turn me completely off of Goshen College.

But as my college search began, I realized what I was searching for in a college community. I realized I needed to attend an institution that would give me the best and most opportunities possible to fully experience the world. I needed a community of people that would support me and help me grow in my faith. Goshen College met both of these requirements, but so did Eastern Mennonite University. After a few visits to EMU, way too many pros and cons lists and lots of stress, I gave in and made my final decision to attend GC in mid-February of 2013.

It wasn’t until my first day of pre-season for soccer in August of that year that I felt as if I wasn’t just giving in to what my family and community expected of me anymore. The months leading up to my first semester of college felt as if I was stumbling along a path paved for me by my parents, confused and unsure of a decision I didn’t make on my own. But after my first day with my new teammates, I knew I was about to make an experience for myself, and it didn’t matter how I made the decision.

Looking back on my first year of college, I really didn’t get the professor’s kid experience in all its glory because my mother was on sabbatical the entire year, studying and living in Ireland and Costa Rica. The distance allowed me to establish my college self and find my place on campus without her and it also allowed our relationship to grow. But this past year, I’ve been blown away at how lucky I feel having her working on campus.

We usually see each other three times a week, and if I didn’t have a class in Newcomer where her office is, I’m not sure I’d see her much at all.  For those of you who don’t know, Newcomer is that teeny-tiny square building way over on the south side of campus where select professors have the privilege of residing and select students occasionally make the trek to. Even if I only stop in for 30 seconds to say hello, it’s always worth seeing her smiling face and giving her a hug. The occasional bag of groceries she gives me for free also doesn’t hurt.

But what I have loved the most about being a professor’s kid is witnessing first hand the impact she has on her students. I grew up hearing her stories about these magical, brilliant but occasionally irresponsible young adults she had the privilege of teaching. But I never truly understood the impression she was leaving on them.

Now that those students are my fellow classmates and close friends, I hear, “Your mom is just the best!” and “I love your mom, but she gives too much homework sometimes,” more times than I can count. I see the impact she has on their lives, pushing students to do better because she knows they can and helping them develop into true global citizens. The love she has for teaching and the passion she has for her students is awe-inspiring, and our relationship is stronger than ever. Being a professor’s kid can have its ups and downs, but I wouldn’t want to have it any other way.