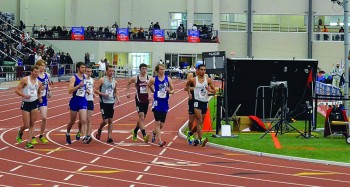 Seniors Mitchell Brickson (Left), Kolton Nay (Center) and Brad Sandlin (Right) charge off of the starting line during their race at the NAIA Indoor Nationals.

Last week, Goshen College sent six athletes to compete in the NAIA National Championship meet. Seniors Brad Sandlin, Mitchell Brickson and Kolton Nay, junior Abby Dunn, and sophomores Kayla Gray and Ryan Smith traveled last Wednesday, March 4, to Geneva, Ohio to compete at the Spire Institute. The quintuplet of Sandlin, Brickson, Nay, Dunn and Gray competed in the 3,000 meter racewalk. Smith also traveled 3,000 meters but his race was a run. All of the six athletes have previously been to a national meet. They were in action on Friday.

The athletes would be looking to earn an All-American honor, which is earned with a finish in the top eight positions. Sandlin and Brickson were able to accomplish this great feat.  Sandlin finished with a personal best time of 13:49.42 and Brickson finished just behind him in sixth place with a time of 14:57.93. Sandlin earned an All-American honor for the second year in a row and Brickson earned that title for the fourth straight year; he has now joined Tina Peters as the only Maple Leafs ever to do so.

As for the rest of the competitors, their results were nothing to snub either. Nay actually finished five seconds ahead of Sandlin, but due to a violation in the racewalk’s unique technique requirements he was disqualified after the race. Dunn and Gray barely missed All-American honors, finishing tenth (15:20.60) and eleventh (15:34.38) respectively. Smith finished nineteenth in his race with a time of 9:05.84.

Head Coach Doug Yoder was pleased with his athletes’ efforts. “I was happy that we ended up with 2 All-Americans from our group. We went in with the potential for everyone to be in the top 8. Brad Sandlin had a personal best time in the racewalk which is what you hope will happen in a big meet,” he stated. When asked about what it means for GC to consistently produce strong track athletes, Coach Yoder explained, “I have never coached a track season—indoor or outdoor—at Goshen College that I have not had qualifiers and for that matter All-Americans. It is an expectation that I have and many of our athletes also have. It has helped Goshen College gain a national recognition, which in turn helps with recruiting.”

Looking forward, Coach Yoder holds high expectations for the outdoor track and field season. “All of our track athletes will work to improve their performances throughout the season.  The goal is always to take a shot at qualifying for the national championship meet.” The Maple Leafs’ outdoor season will begin March 28 when they host the Maple Leaf Invitational.