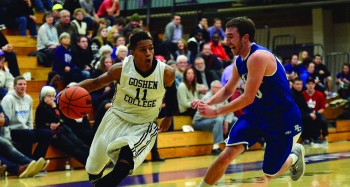 Goshen College men’s basketball lost against Bethel College on the night of Tuesday, February 25 in the Crossroads League quarterfinal, 84-77.

Four minutes into the contest Bethel College used a 14-5 run to take a 23-13 lead in the early going, but after a Goshen timeout the Maple Leafs came to life. Goshen slowly chipped away at the deficit before claiming a 30-27 lead with 6:23 remaining in the first half. Bethel would respond taking a 35-30 lead after a Zach Miller basket, but the Leafs scored 6 of the next 7 points to knot the score at 36-36 with 2:38 remaining. In the closing minutes of the half the Maple Leafs’ first-year Devin Heath-Granger converted a basket to put his team up 40-38. Bethel’s Ryan Wassink free throw trimmed the deficit to 40-39 at the break.

In the beginning of the second half, Goshen held its lead for almost seven minutes until two free throws from the Pilot’s Clay Yeo tied the score at 49-49 with 13:12 left to play. At the midway point, Bethel increased its lead to six points as they were up 60-54.

In the closing seconds with Bethel up 75-72, the Maple Leafs called a timeout that they didn’t have. The play resulted in a technical on Goshen sending Bethel’s Clay Yeo to the line who sank both tosses. From there the Pilots converted their remaining shots at the line to earn the 84-77 win.

Goshen College was led by seniors Stefan Luckey and Brandon Demmings. Luckey and Demmings finished with 21 points and 14 points, respectively. These two players will graduate this year, leaving 11 of the 13 players on the roster eligible to return in 2015-16.

The Maple Leafs finish their season with a 15-16 record and an 8-10 Crossroads League mark after being picked to finish last in the league in the preseason coaches poll. Bethel lost in the Crossroads League tournament final against Indiana Wesleyan University.