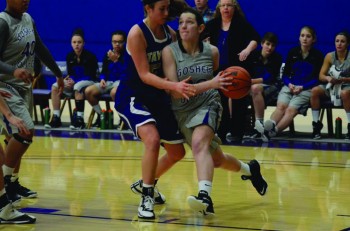 Jamie Stack, senior, maneuvers around Taylor opponent during Saturday match against the Trojans.

The Maple Leafs won an important conference victory against Taylor University on Saturday afternoon. The two teams entered today’s game tied for fifth place in the Crossroads League standings, each with identical records of 8-7.

Taylor got off to a promising start in the contest as they got an early 13-6 lead. Goshen however was quickly able to turn the tide, finding high-percentage shots while limiting the Taylor attack.

Goshen went on a 34-12 run to conclude the opening half holding a 40-25 lead, and the Trojans were unable to complete the comeback effort in the final 20 minutes of play.

Goshen’s Keshia Ward and Jo’Mani Thomas proved difficult for the Trojans to counter on the inside all game long, and at the break Thomas had 13 points and five rebounds, Ward 12 points and seven rebounds.

Taylor started strong the second half, slowly getting closer to the Maple Leafs. With Goshen winning 46-37 at the 12:55 mark, Taylor player Cassidy Wyse scored ten consecutive points for the Trojans to make it 51-47 for Goshen with 9:35 remaining.

After the 53-49 lead for the Maple Leafs, Taylor did not score any points in three minutes. That situation made Goshen extend its lead to double-figures once again at 62-49. Not soon after, a Sears three-pointer at the 1:43 mark gave the Maple Leafs a 68-53 edge, and the lead proved to be decisive as Goshen got its second conference victory in a row.

There was a large discrepancy in shooting percentage in the game, as the Maple Leafs finished at an efficient 53.7 percent from the floor to just 39.4 percent for the Trojans.

Goshen was led inside by two double-double efforts from Thomas and Ward. Thomas was 10-of-15 from the floor for 23 points to go along with 11 rebounds, while Ward added 13 points and 10 rebounds. Sears also had a great game from the guard position, totaling 18 points on 8-of-11 shooting to go with six rebounds and three assists.

Junior player Tyra Carver said, “The game against Taylor was good. Everyone played well. We executed everything perfectly in order for us to win the game.”

“‘Double Trouble’ (Ward and Thomas) played huge for us. Taylor just really had their hands full with them in the paint all afternoon,” said Coach Stephanie Miller. “We only took one three-pointer today because we were able to get their paint so aggressively. Sears put tremendous pressure on their guards and really sunk their paint.”

“There were three keys to this victory,” Miller added. “We needed to win the battle on the glass, which Taylor won last time. We needed to keep them off the free-throw line and the zone defense helped us do that. Finally, we needed to execute offensively against their switching defense and take advantage of the mismatches. We controlled all three and that’s why we were able to come out with a win.”

With this victory, Goshen College is guaranteed to finish no worse than .500 in conference play for the first time since 2004: another conference victory would match that 2004 team for the most in school history.

Carver said that the next goal is to be top 4 in the Crossroads League. “The team goal as of now is to finish the season out strong so that we can become a top 4 seed in the tournament. This allows us to host a tournament game, something that hasn’t happened for a while,” she said.

The next game for the Maple Leafs will be on Saturday 21st against University of Saint Francis.