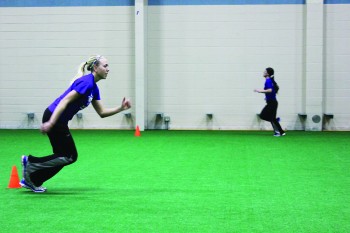 As the spring athletic season quickly approaches, the Goshen College softball team looks forward to the beginning of their year. The season launches at the beginning of spring break and many of the student athletes could not be more excited to get things underway. Senior outfielder Mel Meyer said, “I am excited for my senior year; it feels like it has been a long time coming but the past three years have gone so fast. I am eager to get started and see where my final season takes me.”

Meyer’s senior season will begin in California, where the team is traveling to play a variety of teams. For sophomore outfielder Miranda Robles, this trip is extra special. “Coming from the West Coast to here, it is so exciting to go back there for games,” she explained. Goshen will open with 8th ranked Concordia University in Irvine. Even against a strong opponent, head coach Kristen Kolter is excited to get started. “It will be the first time we step on a field, so for us it is an opportunity to get real fly balls, and to field off of actual dirt and grass. It is always challenging to face teams that have been outdoors on their fields playing for months before us. My primary objective is to figure out our best line-up and work out all the kinks before our conference plays hits.”

The Lady Leafs will be relying on a number of athletes to provide strong contributions during their conference battles. Meyer, who received an All-Conference honor last season, is the only senior on the team and is looked up to by many underclassmen. “Personally, I look up to Mel,” stated Robles. “She is a huge team player. She helped me my freshman year and I looked up to her as a role model. She always pushes every girl on the team to be better.” Additionally, junior shortstop Sam Langley is regarded as a defensive wizard by her teammates. “Sam is an awesome shortstop. She makes sure nothing ever gets by her on the infield,” junior catcher and third baseman Kourtney Mueller said. Robles agreed and also mentioned second baseman Krista Stuliff. “Man, do they (Langley and Stuliff) have range,” she raved. “[Having] those two together at second and short really helps us on the field.”

One of the fresh faces that will be counted on this year is sophomore pitcher and outfielder Jessica Cagigas. According to Coach Kolter, Cagigas transferred from California. “Jessica is a left-handed pitcher with great movement. She also adds a good bat to our lineup and will see time in the outfield when not pitching,” Kolter said about Cagigas. Along with Cagigas, the team also welcomes four first-year student athletes: Courtney Krist, Brooke Maes, MacKenzie Davenport, and Taylor Caouette. The softball team looks forward to incorporating these new faces into a successful season.