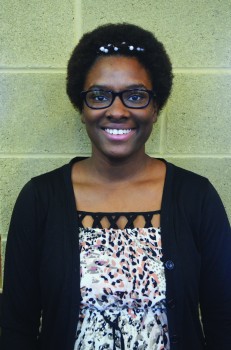 Melia Watkins, sophomore, is a marketing major from Cincinnati, Ohio.

This past Christmas break, Melia Watkins, a sophomore, received the exciting news that she had won an entrepreneur scholarship through a competition offered at Goshen College.

“My idea was to create a hair accessory that would be better suited to accessorize braids instead of ribbons that don’t attach or bobby pins that aren’t secure,” said Watkins. Her product consists of leather strands decorated with beads that are meant to be braided into the hair and secured with a bobby pin.

“I came up with the idea when I was on an Etsy forum and I just asked, ‘What do people do with their hair?’ and people said, ‘I braid leather into my hair.’ So I thought, why not add something to it like beads?”

Watkins, a marketing major, heard about the competition through a class offered at GC called Venture Planning. During this class, students learn about starting a new business and how to create their own business plan. At the end of the semester, students have the opportunity to present their business plan to a group of professors and ask for a certain amount of money to really jump-start your business.

Michelle Horning, professor of accounting at GC, was one of the professors who helped determine who would receive scholarship money.

“What we look for is whether the student has convinced us that they’re passionate about their idea and if we feel like they’re realistic about what the challenges are going to be,” said Horning. “We also look at if the student has already been doing something related because we can see that they were interested enough to sort of get started on their own.”

That’s exactly what Watkins did.

“She convinced us that she was passionate about her idea,” said Horning when asked what made Watkins’ presentation stand out.

Last fall, Watkins put up posters around campus and in businesses throughout the community. She even had her product sold in Gift of Gab, a local clothing store in downtown Goshen, for First Friday’s, and had her product worn in the Jules Boutique Fashion Show back in November.

“I have an ad up on bohobunny.com and the creator of the site will be wearing my product,” said Watkins.

Through craft shows, handing out business cards and etsy.com, Watkins has really begun to see her product take off.

“[Watkins’] presentation was very easy to understand, stating ‘Here’s what I make and here’s how I’ll sell it,’” said Horning. “She was able to talk about what has worked and what hasn’t worked in the past.”

When asked about how this experience will help her in the future, Watkins said, “Knowing how to be versatile with different types of target markets and having that application before I graduate will be a huge advantage.”

Watkins will have another edge over her fellow students as she moves through her business classes because “she will learn things that she can apply right away,” said Horning. “She can actually use what she’s learning in her own business.”

Watkins would recommend this competition to all students at GC.

“No other time are you going to get money because you took a class,” said Watkins. “There’s too much going on once you get out of school so take a risk and just do it, because why not?”