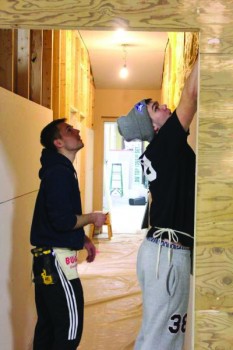 Ryan Hartig, first-year, and Jacob Roth, sophomore help out at Habitat for Humanity in January.

”Whoever wants to know the heart and mind of America had better learn baseball,” says Jacques Barzun, a philosopher of education.

Many people have claimed that baseball has played a big role in the unification of America and has formed a large portion of American culture. What many of us don’t understand is that this amazing sport has molded the distinctiveness of people all across the world. One such person is first-year Canadian student, Ryan Hartig.

Hartig was born and raised in Woodstock, Ontario—the dairy capital of North America.

“My hometown is a lot like Goshen,” says Hartig. He spoke mostly about his intrepid adventures in the Southwestern countryside. Hartig would consider himself a farm boy and enjoys going mudding or driving around on his ATV, all-terrain vehicle, with a few friends. He found out about Goshen College from previous Goshen College students who were also from Canada.

Hartig is currently majoring in psychology and is looking forward to pursuing a career in criminal justice as a policeman. “Psychology has a wider range as opposed to just studying criminal justice,” said Hartig.

He holds great interest in learning how to master more than just the academic aspect of psychology, but more of applied disciplines so as to further comprehend the mental functions and behaviors of the human mind.

Many college athletes have found it relatively hard to juggle both sports and school. Hartig wants to be involved in other extracurricular activities on campus but has found it hard to find any time in his schedule.

Hartig plays the outfield position and has been playing this position for three years. He has, however, been playing baseball for the last 13 years.

“I really miss my family and friends,” Hartig said. He got to see his family over Christmas break.

“My mother recently went back to school to study to be an insurance broker,” Hartig said. He stressed how happy and proud he is that his mother is the strong and inspirational woman she is and has always been. Hartig is currently counting down to the next time he will get to see his family and friends again, “four more months to go.” Hartig said.

He feels very privileged to be here at Goshen College and is excited to meet more people and learn about different cultures and traditions. He is loving every bit of Goshen College and is having a blast getting to know new people. Hartig is also looking forward to the upcoming baseball season, so keep an eye out for him on the pitch this season!